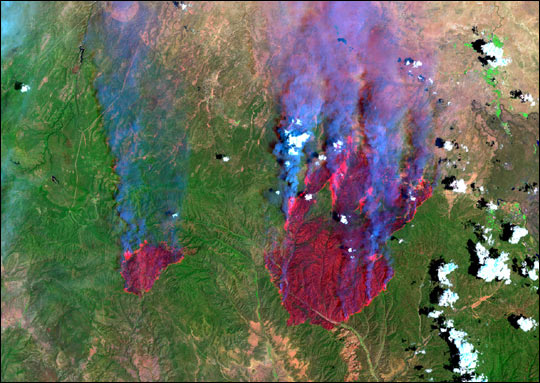 This image from the Landsat Enhanced Thematic Mapper Plus (ETM+) shows the Rodeo (right) and Chediski (left) Fires on June 21, 2002. At the time this image was acquired the two large fires, one allegedly due to arson, and the other by a lost hiker, were still distinct, but over the course of two weeks, the two would merge into a single massive blaze. Consuming almost half a million acres, the fire was the largest and most expensive fire in Arizona’s known history, costing more than $30 million before it was contained.

In this false-color image, vegetation appears bright green and burned areas are deep red. Landsat ETM+ captured the fires? succession over the next three weeks (see links below.)
June 29, 2002
July 7, 2002