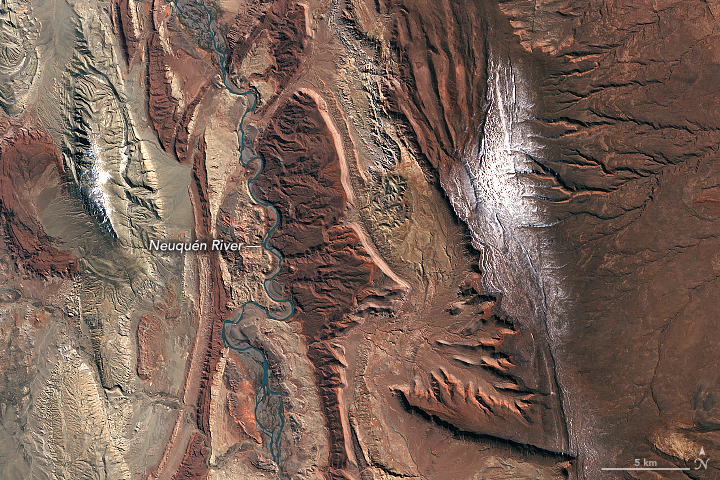 The Geologic Wonder of the Neuquén Basin

As the Neuquén River winds its way from the Andes through west-central Argentina toward the Atlantic Ocean, it passes a spectacular series of rock formations in the Neuquén Basin. For paleontologists, the basin is a great place to find fossils, particularly dinosaurs. And for those in the oil business, it is fertile ground for gas and oil exploration.

The Operational Land Imager (OLI) on Landsat 8 acquired an image showing part of the basin on September 3, 2018.

From space, boundaries between some of the major groups of sedimentary rock formations are visible. In the first image, the deep reds of the Candeleros Formation—a sequence of sandstones formed roughly 90 to 100 million years ago in a braided river system—dominate the landscape. These rocks are flanked in some areas, especially near the river, by a green-yellow sequence of rocks that are part of the younger Hunical Formation, formed during drier times. The older Royosa Formation, meanwhile, peeks through in some areas where erosion has scraped away overlying rock layers. (See the second image.) 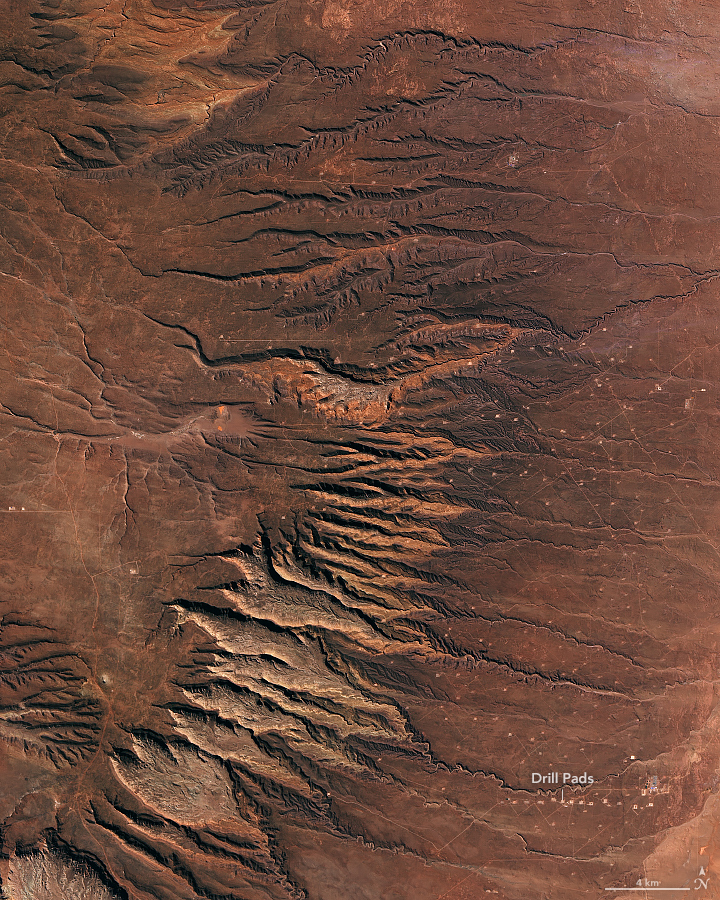 Paleontologists have uncovered quite a menagerie of fossilized fauna in Candeleros rocks, including ancient species of fish, frogs, snakes, turtles, small mammals, and several types of dinosaurs. Few of the fossilized creatures have received the notoriety of Giganotosaurus carolinii—a carnivorous theropod thought to be larger and faster than Tyrannosaurs Rex.

Petroleum geologists are more interested in what lies beneath the Candeleros Formation. Several layers of rock, formed when the area was covered by an ocean, contain gas and oil. While drilling has been ongoing here since 1918, the recent discovery of a large deposit of shale gas and oil in the Vaca Muerta Formation has made the Neuquén Basin one of the few regions outside of the United States where companies are pursuing horizontal drilling and hydraulic fracturing.