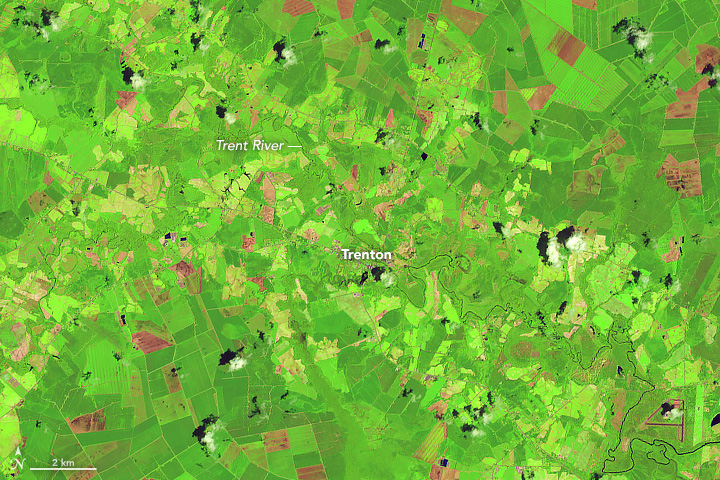 A Broad View of Flooding in the Carolinas

The National Weather Service office in Raleigh offered a preliminary estimate that nearly 8 trillion gallons of rain fell on North Carolina from Sept 13 to 17, 2018. That led to catastrophic flooding across many parts of the state.

Before and after Hurricane Florence swept through the Carolinas, the Operational Land Imager (OLI) on the Landsat 8 satellite observed several residential areas and major rivers. The image pair above shows the Trent River on July 14, 2017, and September 19, 2018. These false-color images use a combination of visible and infrared light (OLI bands 6-5-4) to make it easier to distinguish between flood waters and land.

The Trent River reached an all-time high of 29 feet (8.8 meters) on September 17, more than twice the flood stage (the height at which the river will overflow and cause damage). Water levels decreased to 24 feet (7.3 meters) by September 20, but many homes, public buildings, and roads leading to the town of Trenton are full of standing water. 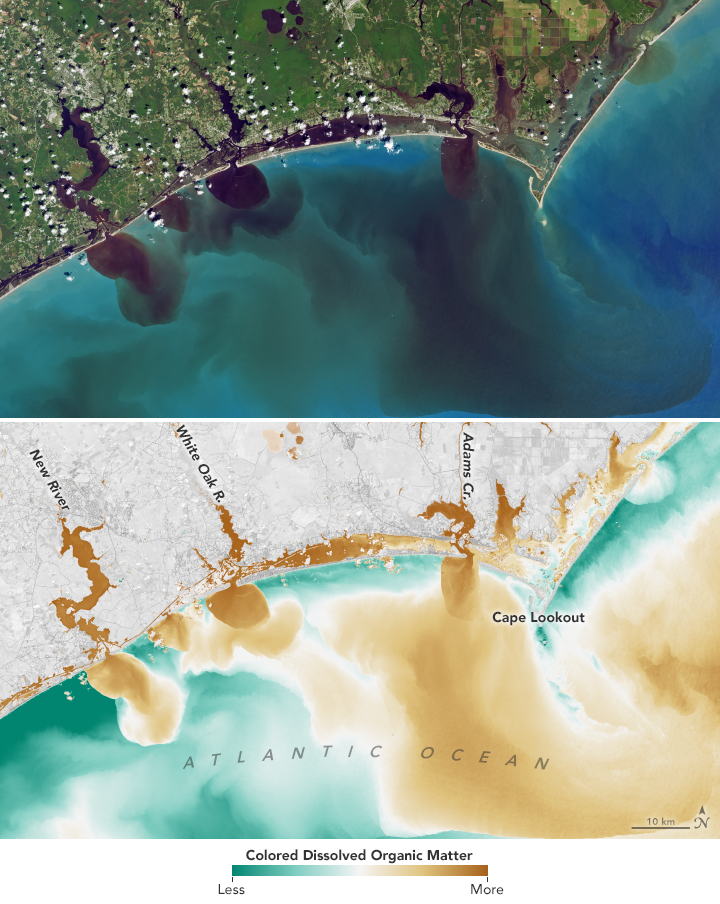 The second pair of images shows how the flood has affected water quality in the White Oak River, New River, Adams Creek, and their outflows along the coast on September 20, 2018. The natural color image from Landsat 8 reveals how soils, sediments, decaying leaves, pollution, and other debris have discolored the water in the swollen rivers, bays, estuaries, and the nearshore ocean.

The second image combines visible and infrared data from Landsat to reveal the amount of colored dissolved organic matter (CDOM) in those waterways. Organic matter—such as leaves, roots, or bark—contain pigments and chemicals (such as tannins) that can color the water when they dissolve. Depending on the amount of dissolved particles, the water in natural-color imagery can appear blue, green, yellow, or brown as the CDOM concentration increases.

The Trent was one of 16 rivers that reached major flood stage in North Carolina on September 18. The majority of the rivers have started to subside but still remain in major flooding stage.

The National Weather Service reports a few rivers are still rising. The Neuse River at Kinston and a portion of the Cape Fear River are projected to rise an additional foot by September 22.