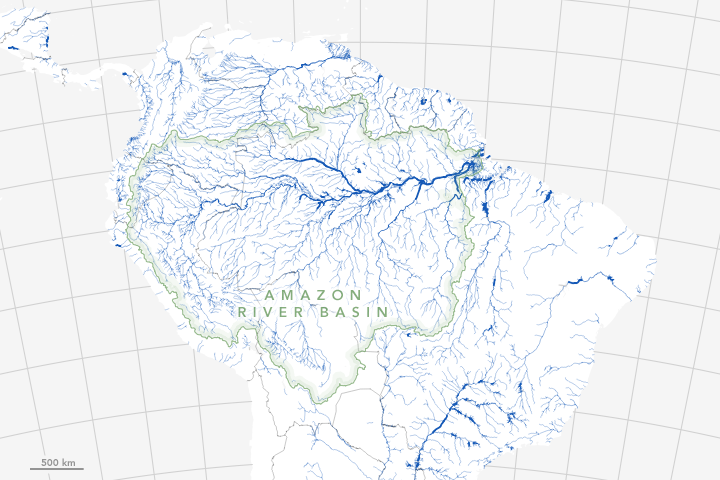 For a long time, the scientists who study how carbon cycles through the environment did not give much thought to streams and rivers. They put most of their effort into understanding how carbon moved between vast stores found in the world’s oceans, forests, and atmosphere. But in the past fifteen years, it has become clear that streams and rivers—particularly those in the tropics—play a notable role in the carbon story.

“It is the intense biological activity in tropical basins that make rivers in the tropics such hot spots for greenhouse gas emissions,” said George Allen, a Texas A&M hydrologist and the author of a new study of the surface area of Earth’s streams and rivers. Allen and colleagues found that rivers and streams cover more land surface area than previously estimated, so they probably emit more carbon as well.

Carbon can leach from soils and decomposing vegetation into streams and rivers, and then into the air in the form of carbon dioxide, methane, and other greenhouse gases. But estimates of this carbon “outgassing” by waterways can vary widely, and scientists caution that a scarcity of data on streams and rivers means that even the best estimates fail to capture the scope of what is happening and where.

The current best estimate of carbon outgassing by rivers and streams—2 petagrams per year—puts them on par with deforestation (1 pg) as a source of carbon. It also means rivers probably partly counteract how much carbon oceans (2 pg) and forests (3 pg) take up. (For comparison, fossil fuel burning adds about 8 pg of carbon into the atmosphere each year.) 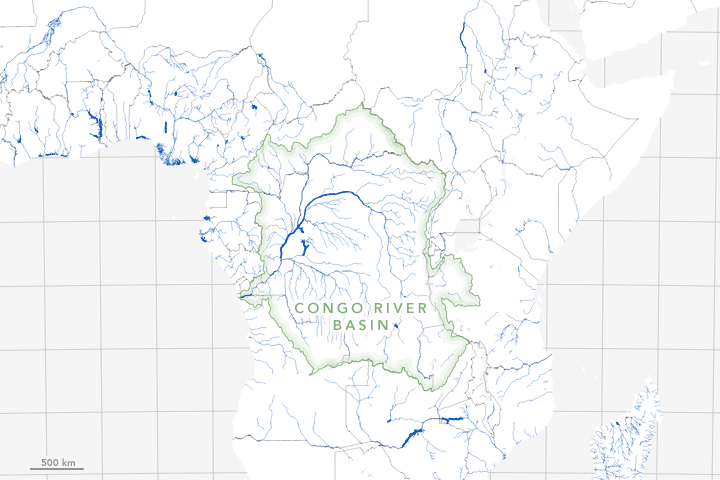 The maps above show river widths for the Amazon and the Congo—two of the largest river systems in the tropics. Scientists think that roughly 75 percent of the carbon emissions from rivers come from tropical waterways. The Amazon alone accounts for a quarter of these emissions—enough that the river emissions may cancel out the storage in the Amazon’s rainforest.

Emissions from the Congo basin are thought to be the highest of any river system in Africa, though significantly less than the Amazon. This is partly because the Amazon has many more tributaries that cover more surface area. In the Amazon, water also floods across wide, lush floodplains during the wet season and lingers for months—ideal conditions for the rapid transfer of carbon into the atmosphere.

The underlying geology is what gives the Amazon its branching shape in comparison to the more constrained form of rivers in the Congo basin. “A larger proportion of the Amazon is covered by loose alluvial sediments, so large Amazon rivers easily carve paths through the sediment, resulting in the dendritic pattern in the tributary network,” explained Allen.

In contrast, the hard bedrock under much of the Congo basin has prevented a dendritic pattern from developing across the entire basin. Instead, it promotes an unusual series of parallel rivers seen in the southwestern portion of the basin and the large bend in the main stem.

Better estimates of river surface area should help scientists constrain estimates of carbon flux for rivers and streams all over the world. “But overall, we are still very much in exploration mode,” noted Nicholas Ward, a hydrologist at Pacific Northwest National Laboratory. “Carbon fluxes in tropical systems are poorly constrained, but this is a problem for freshwater systems in general.”