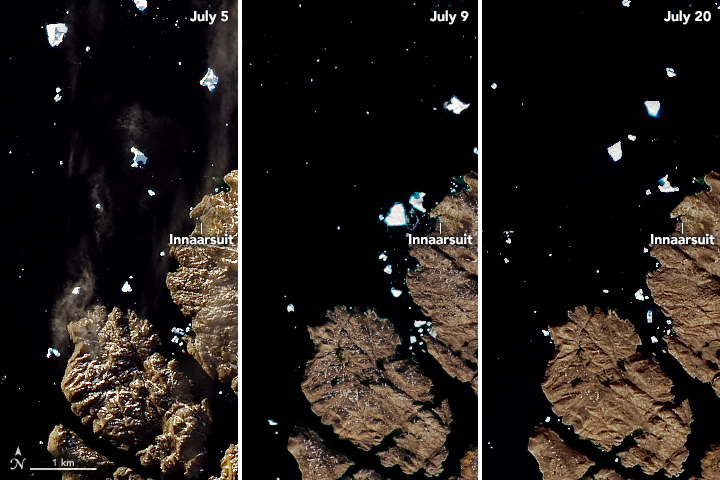 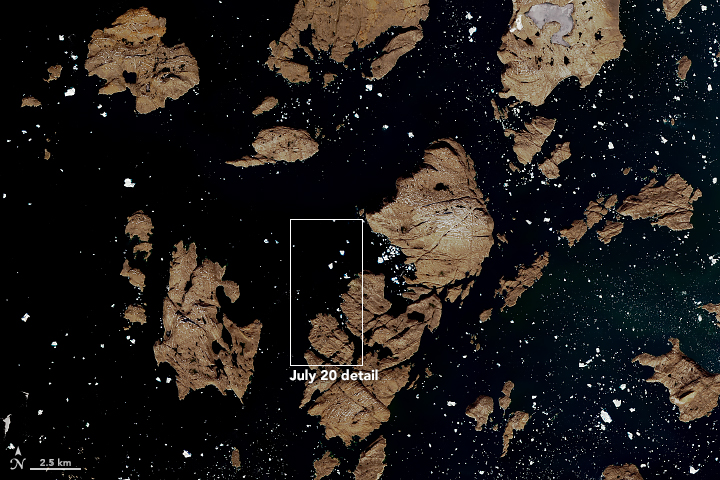 In July 2018, an iceberg weighing more than 10 million tons parked itself just offshore of Innaarsuit, a small island village in northwestern Greenland. Ground-based photographs and videos showed the massive chunk of ice as it loomed over the small village.

“The photos were absolutely beautiful,” said Kelly Brunt, a glaciologist at NASA’s Goddard Space Flight Center. “The Z dimension (height) is pretty extreme.” Various news media reported that the berg stood 300 feet (90 meters) above the water line—about as tall as the Statue of Liberty.

Large icebergs are common in Baffin Bay, as is clear in the second image above. And most of them usually move along paths that keep them out of Innaarsuit’s harbor. But the height and position of this berg was menacing. “Bergs pose a threat when they sluff off chunks of ice,” Brunt said. “The waves that are created from this process can be quite large and could inundate the inhabited coast.”

When viewed from space, the iceberg is like a “Where’s Waldo?” puzzle, becoming lost in a sea of similar looking bergs (second image above). On July 5, 2018, the Operational Land Imager (OLI) on Landsat 8 acquired a natural-color image (below) of the ice in the area. On July 9, the Multispectal Imager on the European Space Agency’s Sentinel-2A satellite observed several large bergs (below) just offshore from Innaarsuit. Then on July 20, Landsat 8 acquired another view (top of this page) after the icebergs appeared to drift north again, away from the village. 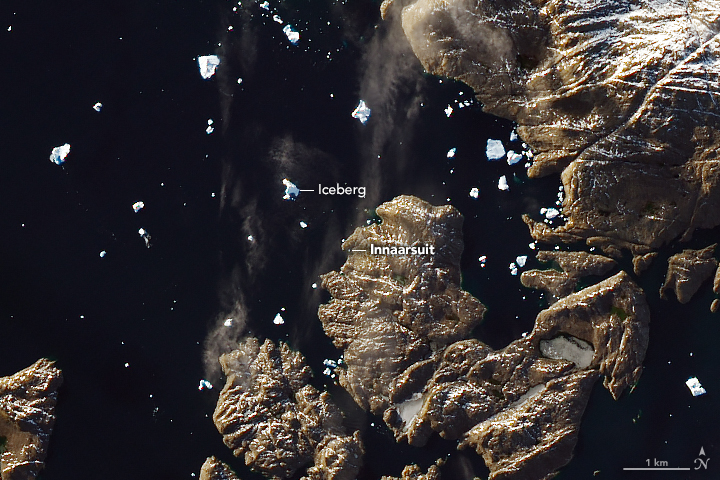 According to video footage and news accounts, a small chunk broke off the berg and sent waves rippling through the harbor on July 12. In subsequent days, some of the town’s 170 residents were evacuated from low-lying areas due to fears of a larger breakup and tsunami-like wave.

“If the iceberg’s Z dimension (height) is large relative to the X and Y dimension, the ice could roll,” Brunt added. “The sides of tall icebergs like this often have a series of complex water lines, suggesting that they have experienced a complex history of shifting and rolling slightly as they change shape. A big roll could be pretty scary, and could create a substantial wave.”