After nearly running dry six months ago, Cape Town’s reservoirs have risen dramatically. Rain has poured down on southern Africa on several occasions in recent months. According to Cape Town’s Department of Water Affairs, water levels in the city’s main reservoirs stood at 55 percent of capacity on July 16, 2018.

The largest reservoir—Theewaterskloof—holds 40 percent of Capetown’s total water storage capacity, so the state of that reservoir serves as a good barometer for the amount of water available to the city. The Operational Land Imager (OLI) on Landsat 8 acquires new imagery of the reservoir every two weeks. The animation above, based on Landsat imagery, shows the condition of the reservoir at two month intervals between 2015 and 2018. Parts of the reservoir with standing water appear dark blue; areas where the bottom of the reservoir was dry and exposed are light blue. The pair of natural-color images below, captured by OLI, show the change in water levels at Theewaterskloof between July 22, 2017, and July 9, 2018. 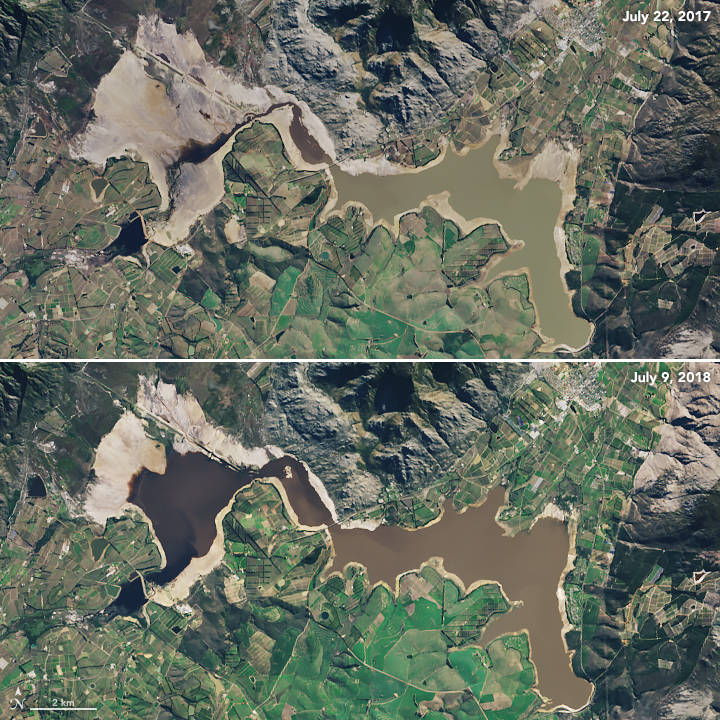 In June 2018, Cape Town authorities credited voluntary water conservation by residents, water use restrictions and tariffs, the installation of a city-wide pressure management system, a leak repair program, and the favorable rains for averting Day Zero, when most of the taps would have been shut off. Despite the recent increase in water stored in the reservoirs, the city plans to keep water-use restrictions in place until reservoirs are 85 percent full.