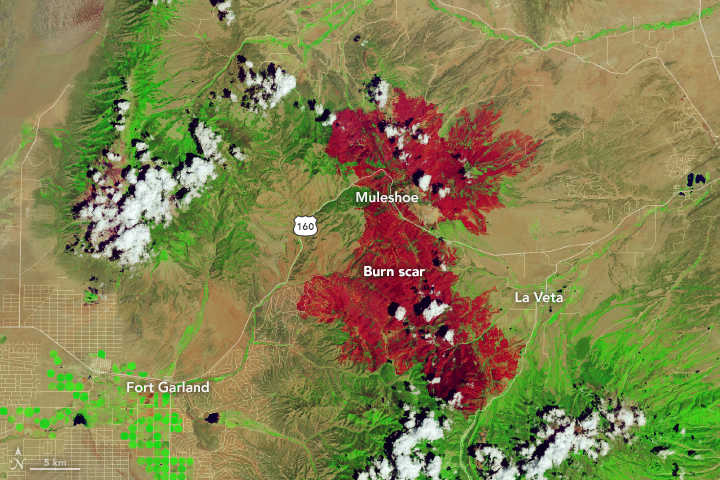 On June 27, 2018, an illegal campfire caused the third-largest wildfire in Colorado state history, known as the Spring Creek Fire. According to news reports, more than 140 homes have been destroyed and 1,481 firefighters were on the scene as of July 10, 2018.

This image was acquired on July 6, by the Operational Land Imager (OLI) on Landsat 8. The image is false color (OLI bands 7-5-2) to better differentiate burned areas (red) from the surrounding landscape. The fire is located five miles northeast of Fort Garland and spanned on both sides of Highway 160.

The fire was 83 percent contained on July 12, with the fire completely contained for the area south of Highway 160. The northwest region of the fire remained uncontrolled as crews had trouble accessing areas of steep terrain with vegetation and other materials susceptible to burning. Officials estimated the fire would be completely contained by the end of July, more than a month after it ignited. Upcoming rainfall in the area could further help firefighters manage the blaze.

Spring Creek fire was one of 14 fires burning in Colorado on July 12. The state experienced hot summer days, high winds, and extreme to exceptional drought conditions for the past three months. Colorado has not faced similar drought conditions since 2013, according to data from the U.S. Drought Monitor. Officials instated bans against all open burning around the state in light of the dry, hot conditions.