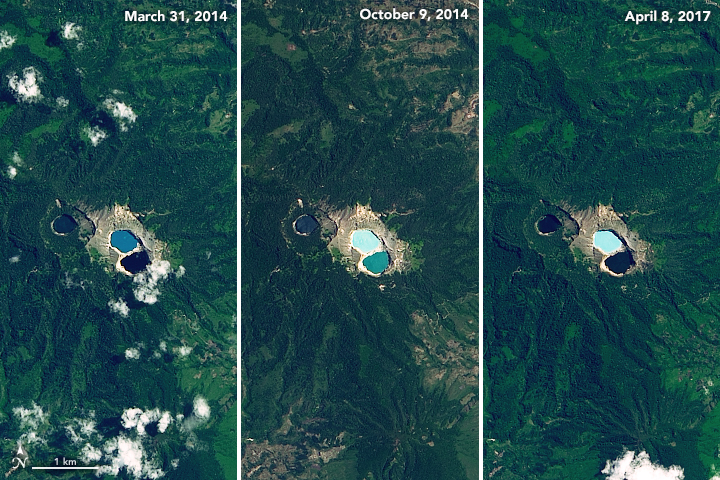 From milky white to vibrant turquoise to blood red, the three lakes at the summit of the Kelimutu volcano are known to unpredictably change color— a phenomenon unique to this volcano on the Indonesian island of Flores.

These images, acquired by the Operational Land Imager on Landsat 8, show the various colors of the crater lakes on three different days. All three crater lakes appear on the crest of the volcano with the eastern two lakes sharing a common crater wall.

The changing colors have been a source of supernatural folklore. Locals say the lakes are the resting place for departed souls. Depending on the good or bad deeds performed in their life, the deceased get placed into the various lakes.

The westernmost lake known as Tiwu Ata Mbupu (meaning Lake of the Old People) is usually blue. Tiwu Nuwa Muri Koo Fai (Lake of the Young Men and Women) is usually turquoise. The southeastern lake called Tiwu Ata Polo (Bewitched Lake) is usually red or brown. It is believed to be the home of those who have been evil in life. Depending on when you visit, the colors can range from white, green, blue, brown, or black. In 2016, the lakes changed colors six times. 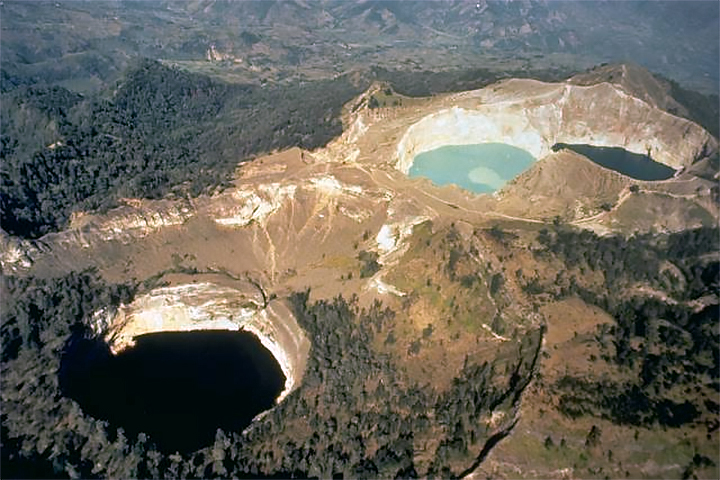 While other lakes can be colored by species of bacteria, the changing colors at Kelimutu are thought to be caused by fumaroles, or volcanic vents that release steam and gases such as sulfur dioxide. The fumaroles produce upwelling in the lakes, such that denser, mineral rich water from the bottom is brought towards the surface. All of the lakes contain relatively high concentrations of zinc and lead.

While minerals play a part in the coloring, another key factor is the amount of oxygen present in the water. Like your blood, these lake waters appear bluer (or greener) when low in oxygen. When they are oxygen-rich, they appear blood red or even cola black.