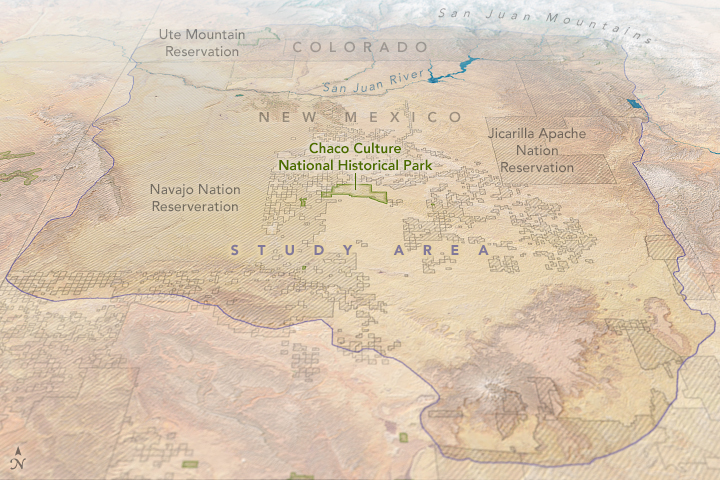 The Chaco civilization flourished for hundreds of years in what is now the southwestern United States, reaching its height between about 1000 and 1100 CE. In modern times, researchers have been piecing together a picture of Chaco culture based on artifacts excavated across hundreds of archaeological sites. They have found a range of structures such as multi-story “great houses,” many connected by a network of roads. They have even probed the ancient DNA of human remains to learn more about the Chaco people and how they structured their society.

But while some archaeologists have boots on the ground, other researchers are learning about the ancient civilization with data collected from space. That was the approach in spring 2017 for a research team sponsored by NASA’s DEVELOP program. Led by Kelsey Herndon of the University of Alabama in Huntsville, the team used NASA satellite observations and other data to map the potential locations of yet undiscovered Chacoan sites. They then applied a modeling technique to map the risk of disturbance to archaeological sites across the entire San Juan Basin.

The basin, outlined in the top map, spans about 19,400 square kilometers (7,500 square miles) of the Four Corners region of the American Southwest. Many of the Chacoan sites, concentrated in New Mexico within the boundaries of the Chaco Culture National Historical Park, are protected by federal law. But sites outside the park boundaries are at risk of disturbance by modern infrastructure.

“Using NASA Earth observations allowed us to really understand the scale of the potential damage to these ancient sites from oil and gas mining and encroaching settlements,” Herndon said. “It would be extremely difficult and impractical to assess the susceptibility of all of these sites individually. High-resolution satellite imagery and models complement the excellent work being done by archaeologists on the ground and allow us to address this problem quickly over a large area.” 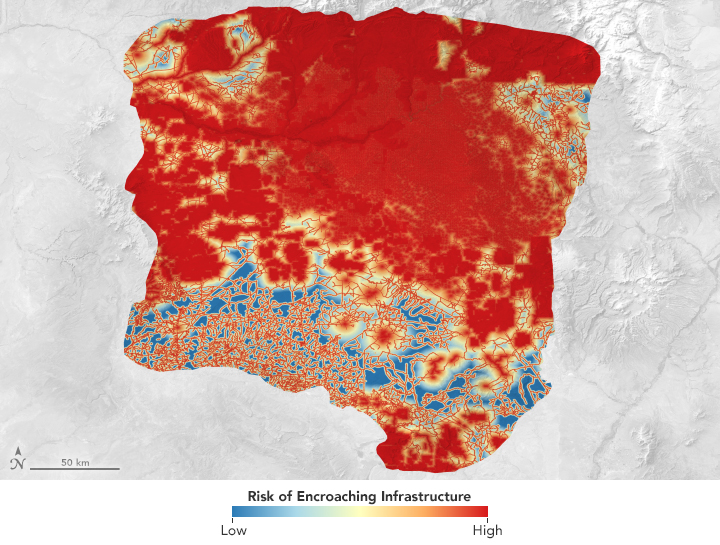 The second map shows the relative level of risk of disturbance from low (blue) to high (red) across the basin. Herndon and her team determined these risk levels by considering an area’s proximity to modern roads, water features, and existing or planned oil and gas drilling operations. They also considered the expected population growth for the area between 2015 and 2020.

By considering all of these factors, the team found that 44 of the 123 known Chaco sites included in the study are threatened by development. Of those, 19 are already protected by the National Park Service.

“These maps are available to help the National Park Service better understand which sites could be prioritized for inclusion in future protected areas.” Herndon said. “Understanding the susceptibility of these sites to expanding infrastructure is more important now than ever as population pressures in the region increase and oil and gas exploration is on the rise.”