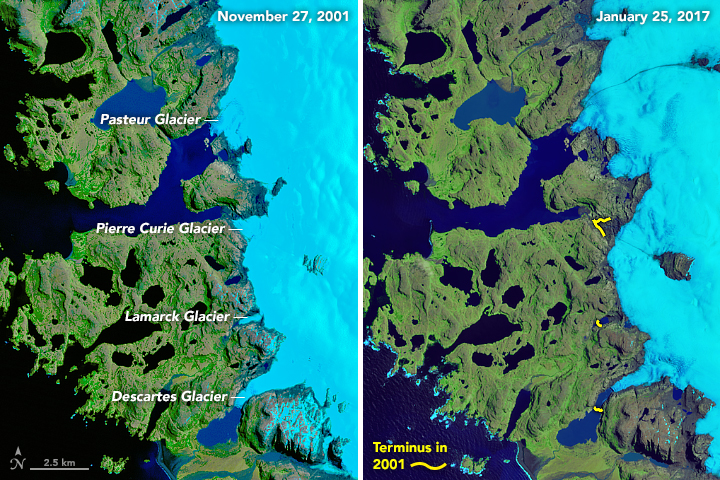 The Kerguelen Islands rise from the southern Indian Ocean, not far from the “Furious Fifties.” As a result, the Kerguelens are often shrouded by clouds, making it hard for satellites to get a good look at the shrinking ice cap on the archipelago’s main island, Grand Terre.

“There are limited in situ observations here, so without satellite images we do not have much to go on,” said Mauri Pelto, a glaciologist at Nichols College who has been analyzing satellite imagery of glaciers since the 1980s. “Radar can see the size of glaciers to some extent, and we can measure height, but without good imagery, we can’t measure velocity.”

On January 25, 2017, the Operational Land Imager (OLI) on Landsat 8 got a rare, clear look at the islands (right image) and the western side of the Cook Ice Cap. The left image, acquired with the Enhanced Thematic Mapper Plus (ETM+) on the Landsat 7 satellite, shows the same area on November 27, 2001. Both images are false-color (OLI bands 6-5-3 and ETM+ bands 5-4-2—shortwave infrared, near-infrared, and green light) to better show detail in the icy areas.

Over 16 years, each of the main glaciers in the images retreated. Near the top, the 600-meter-retreat of Pasteur Glacier means that its ice front now terminates on land, not in the water. To the south, Pierre Curie Glacier retreated about twice as far. Lamarack Glacier retreated by 1100 meters, its terminus also trading water for land, while Descartes Glacier retreated by 1000 meters through a narrow arm of a lake. Notice the appearance of nunataks—peaks of rock that now protrude from the ice surface.

A study published in 2015 confirmed that the retreat of this ice cap is due primarily to changes in snowfall. Since the 1970s, precipitation on the Kerguelen Islands has not been sufficient to offset the melting of snow and ice. Similar losses are occurring to glaciers in other southern subpolar regions, such as in New Zealand and Patagonia.