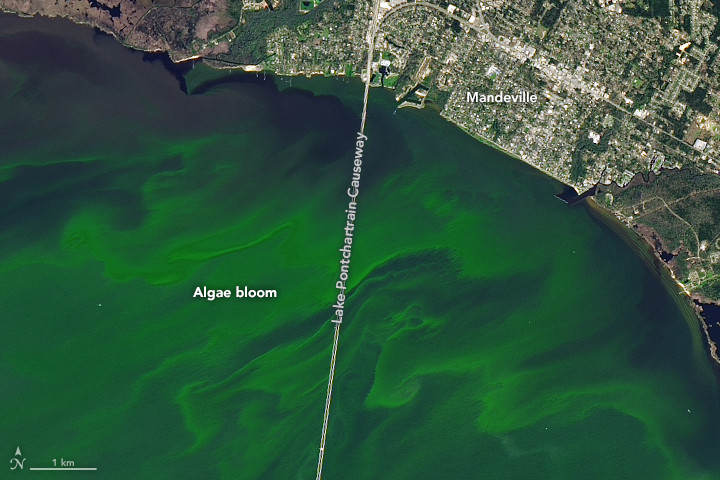 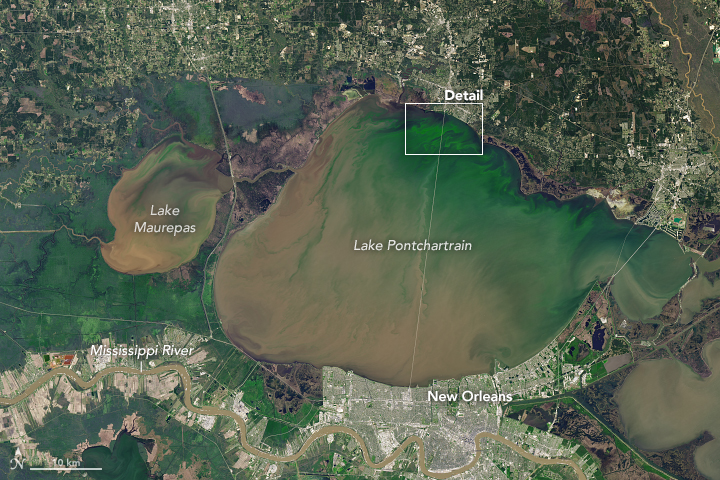 Like plant life on land, phytoplankton in the water flourish under just the right conditions. For phytoplankton in Louisiana’s Lake Pontchartrain, those conditions include a combination of ample sunlight and nutrients, a long stretch of warm weather, and calm winds.

Blooms of phytoplankton appeared in Lake Pontchartrain several times in March 2018. The Operational Land Imager (OLI) on Landsat 8 acquired this image of a colorful bloom on March 3, 2018.

Lake Pontchartrain and other nearby lakes and inlets compose a huge estuary east of the Mississippi Delta; collectively they drain an area spanning 12,000 square kilometers (4,600 square miles). Unusually warm temperatures in February and March helped spur the early spring bloom shown above, even before nutrients from the Upper Mississippi could pour into the region.

Blooms become more likely when excess river nutrients reach the lake through the Bonnet Carré Spillway. During flood season, the spillway is occasionally opened to divert excess water from the Mississippi River and relieve pressure on levees near New Orleans.

On March 8, the U.S. Army Corps of Engineers started to open the spillway in response flooding along the Ohio and Mississippi Rivers. The pulse of sediment-laden water is visible on March 14. Such inputs of nutrients—often fertilizer from the Mississippi watershed—can set the stage for large blooms of algae and cyanobacteria—single-celled organisms that can contaminate drinking water and pose a risk to human and animal health. Satellite imagery can help identify the occurrence of a phytoplankton bloom, but direct sampling is required to discern the species.

The extra nutrients from the Mississippi helped trigger another bloom around March 25. However, cloud cover impeded satellite views on most days.

By early April 2018, the blooms appeared less vibrant. John Lopez of the Lake Pontchartrain Basin Foundation reported that wind on the lake helped to break up the second bloom and suppress its growth. But nutrients from the river can persist in the lake for months, making it possible for more blooms to develop later this year.