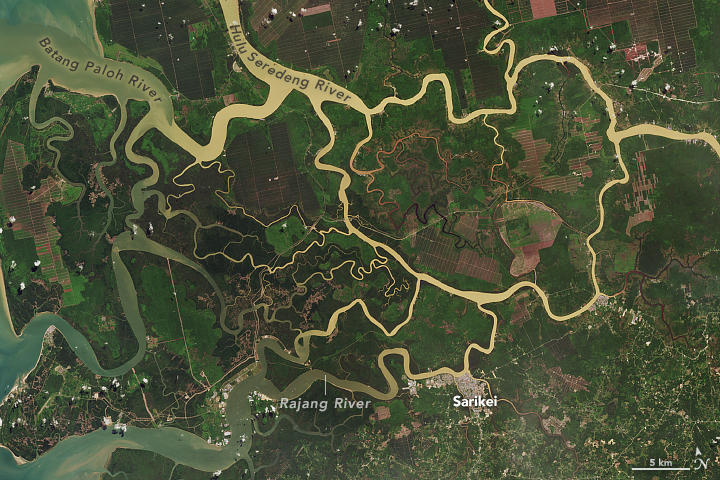 In Sarawak, rivers stem from rivers stemming from even larger rivers. The snake-like nature and sharp turns of these waterways resemble a painting when viewed from space, but the causes of these patterns are rooted in nature.

On June 16, 2016, the Operational Land Imager (OLI) on the Landsat 8 satellite acquired this image of the Sarawak River Delta on the island of Borneo in East Malaysia. The Rajang River, visible at the bottom of the image, is Malaysia’s longest (563 kilometers) and can be navigated from the South China Sea to points far inland.

The area’s unique drainage patterns are most obvious in the top-right quadrant of the image, northeast of Sarikei. Here you can see the Rajang River forking at several sharp T-shaped junctions, heading at times 90 degrees from its previous path, and then turning west and resuming its path toward the sea. According to Robert Gastaldo, a sedimentologist at Colby College, this so called “T-junction splitting” is the result of faults in the Earth’s upper crust. The faults cause blocks of land to drop downward, which strongly influences the path that water will take.

Not all of the rivers pictured here take such sharp turns. According to Gastaldo, the gentle snake-like turns are sculpted by the incoming and outgoing tides, which can be significant in this delta. During a king tide, water can rise and fall by 6 meters within a 12-hour cycle. Tides also influence the shape of a river’s mouth. As a tide falls, or “ebbs,” seawater rushes seaward. The high speed of that rushing water, combined with the normal seaward flow of river water, sculpts a funnel-shaped mouth. The Batang Paloh is a clear example of this phenomenon, where the mouth is much wider toward the ocean and narrows toward the land.

You can also see an array of colors in the waters throughout the delta. Light brown “tea-colored” water is caused by humic acids that have leached into the water from the peatlands. (The entire area is blanketed in a layer of thick peat that has been accumulating since about 7,500 years ago.) Yellow-tinged waters contain a mix of this peat and large amounts of suspended sediment. The gradient in color depends on how much sediment remains suspended in the water as it approaches the coast.

“In the 1960s, the Rajang River flowed clear with a tinge of light-brown tea water,” Gastaldo said. “Once logging commenced, the high amount of rainfall in this part of the island could more easily erode the soils, significantly increasing the suspension load.”