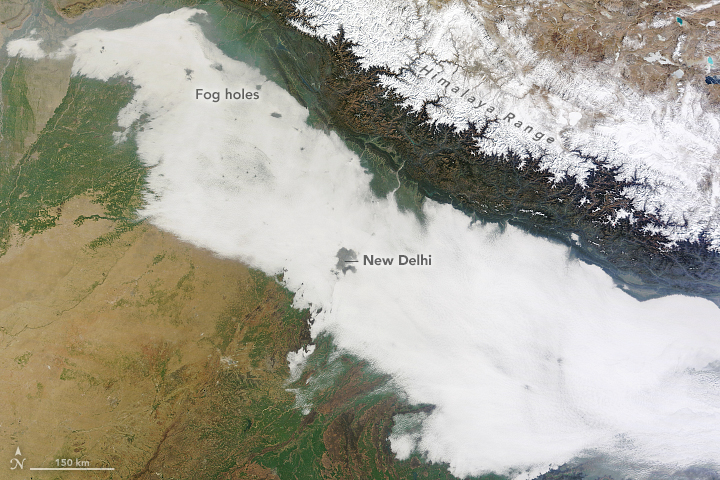 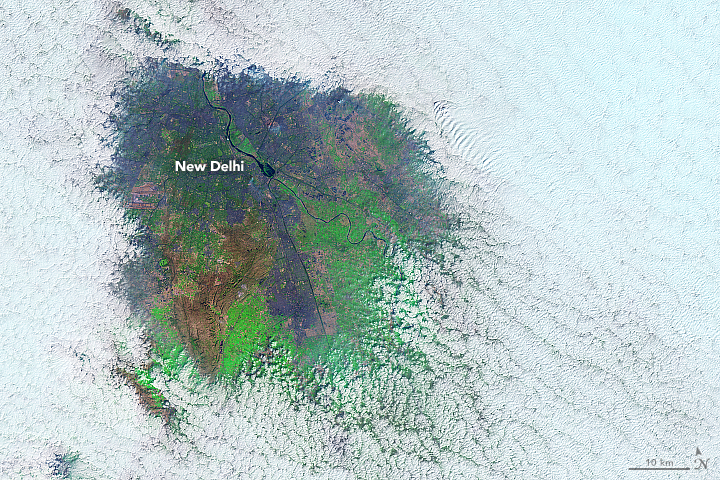 In 2016, a satellite image showed peculiar holes in a layer of fog over northern India. Those holes seemed to correspond with the locations of major cities, but the cause was a mystery.

“I would definitely say there is a connection with the cities,” said Steve Lang, a research meteorologist at NASA’s Goddard Space Flight Center in an Earth Observatory story about the phenomenon. “But without being there, we can only speculate that it could be due to either additional aerosols, urban heat islands, or both, having an effect on the clouds.”

A recent study led by Ritesh Gautam of the Indian Institute of Technology (now at Environmental Defense Fund), has found that Lang and other scientists were correct in their hypothesis that aerosols and urban heating can influence fog. The paper was published January 2018 in Geophysical Research Letters.

“The urban heat island effect is totally opposite to the effect that aerosols have on fog,” said Gautam. “On the one hand, you have air pollution likely amplifying fog. On the other, urban heating is helping fog dissipate faster.” The result is the formation of so-called “fog holes” that are occasionally visible over cities in satellite imagery.

Aerosol particles from pollution can serve as “seeds” that make it easier for fog to form. At the same time, an opposing effect can take place. Fog formation requires a stable layer of moist air—high relative humidity—in the lowest part of the atmosphere near the ground. But warm urban areas can reduce the relative humidity, making less moisture available for fog formation and leading to fog holes.

The second image, acquired by the Operational Land Imager (OLI) on the Landsat 8, shows a detailed view of a fog hole over New Delhi on January 3, 2018. The image is false-color (bands 6-5-4) to better distinguish between land and clouds.

“I am still as awestruck as when I first noticed this phenomenon over northern India during my Ph.D. research in the mid-2000s,” Gautam said. Since then, Gautam and colleagues have been motivated to investigate the interactions between air pollution and fog, and more recently to tease out the ways in which urban heat affects those interactions.

For the 2018 study, Gautam looked for fog holes around the planet in 17 years of images acquired by the Terra and Aqua satellites. In northern India, holes ranged from a few kilometers to tens of kilometers wide. Delhi, the site of the largest fog holes, also happens to be the region’s largest urban hotspot. The sizes of fog holes appeared related to population: the larger a city’s population, the larger the hole. Holes over Delhi also occurred the most frequently, with 50 percent fewer foggy days compared to surrounding areas.

“In densely populated and polluted environments like India, the winter fog is a major environmental issue,” Gautam said. He notes that every December and January, dense fog disrupts transportation on a daily basis, causing massive delays and cancellations in air and rail travel, and leading to numerous car accidents. Air quality and public health issues are also a concern.

“There has been a long-standing need in India to develop sophisticated fog prediction capability to aid air and rail transportation management,” Gautam said. “Fog holes add another important dimension to the fog problem, where we must account for the urban heating effect when assessing the interactions between aerosols and fog.”

India is not the only place where the effect has been observed. Gautam’s team found fog holes over China, Europe, and the United States.