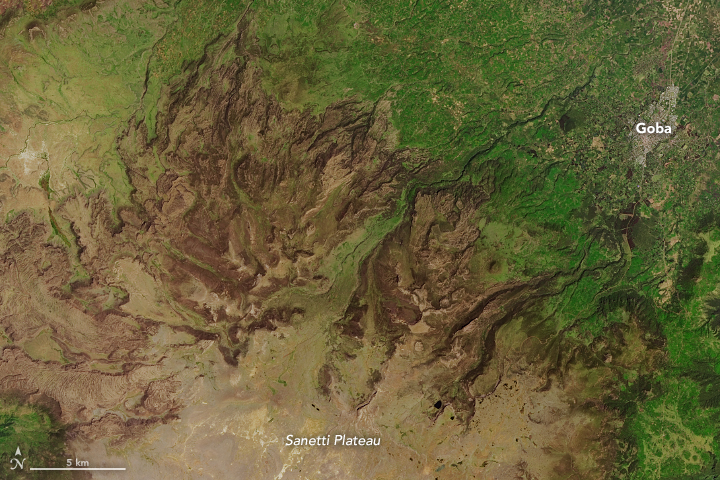 The Bale range in Africa is made up of mountains built upon mountains. Formed tens of millions of years ago by successive outpourings of lava, the Sanetti Plateau towers over southeastern Ethiopia. The plateau spreads across thousands of square kilometers; with much it at 3,000 meters (10,000 feet) above sea level, it is the most extensive high-altitude feature in Africa. On top of that high base, several volcanic cones rise above 4,000 meters.

The Operational Land Imager (OLI) on Landsat 8 captured this image of the plateau on October 31, 2016. The highest parts appear brown and are dominated by afro-alpine grasslands, shrubs, and heather. They are also rich with mosses, lichens, and giant lobelia. Along the northern edge, rivers have cut deep gorges full of grasses, sagebrush, and wildflowers. Lower-altitude areas along the slopes of the plateau support forests of juniper and kosso. Most of the land around Goba, a town of 30,000 people, is used for farming.

Bale Mountains National Park occupies much of the plateau. These highlands are the only place in the world where the endangered Ethiopian wolf—the rarest canine in the world—lives in the wild. Other rare species include the big-headed African mole rat, the mountain nyala, and bale monkeys. In nominating the park as a World Heritage site, the United Nations noted that more mammal species would go extinct if the Bale Mountains habitat disappeared than any equivalent parcel of land on the planet.

The natural ecosystems of the park and the surrounding region are under pressure. Growing human populations have caused increases in grazing and land clearing to accommodate new farmland; wildfire has increased as well. Fire is used to improve forage for animals, make poaching more difficult, and eliminate shrubs that hyenas and other wild animals take advantage of when hunting livestock.

According to one study of land cover change (based on observations from Landsat and other satellites), the area used for agriculture increased roughly five times between 1973 and 2008. Other studies have shown significant declines in forests and woodlands in the Bale Mountains in recent decades.

Detailed information about the frequency of fires on the plateau is scarce, so a research team sponsored by NASA’s DEVELOP program recently analyzed satellite data to determine how often the ericaceous vegetation on the plateau burns. The group of students and scientists found that nearly all the vegetation in the study area had burned since 1995, though there were few repeated fires in the same location. By passing their findings over to partners with the non-profit Murulle Foundation, the DEVELOP team hopes to aid conservation efforts on the plateau.