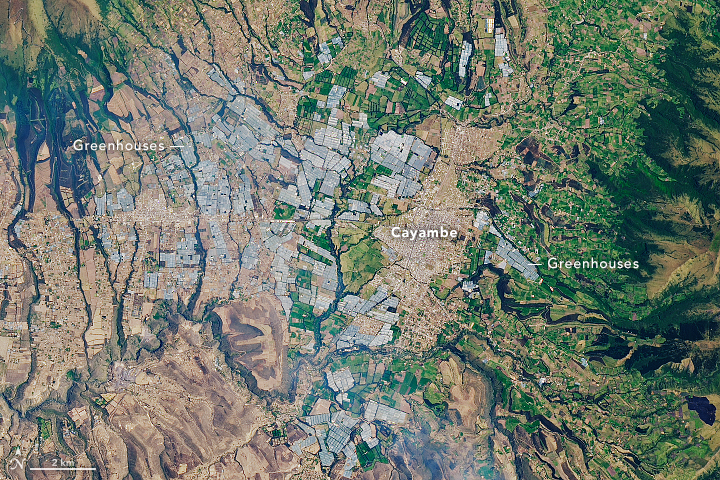 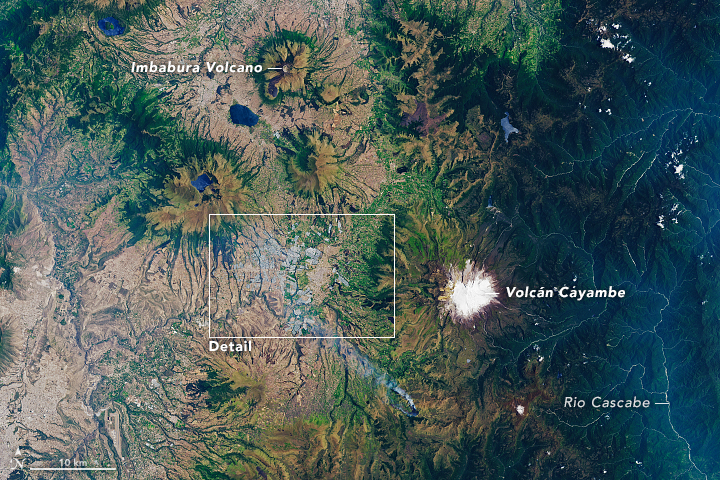 Several hundred years ago, pre-Inca and Inca civilizations grew corn, potatoes, beans, quinoa, and squash on raised beds in the verdant Cayambe Valley. Now greenhouses dominate this landscape, and most of them are filled with roses and other cut flowers that will be harvested, packed, and shipped to the United States. Located in Ecuador’s Northern Highlands, the Cayambe Valley has one of the highest densities of greenhouses for rose production in the world, said Gregory Knapp, a geographer at the University of Texas at Austin and a scholar of Ecuador’s booming cut flower industry.

The Operational Land Imager (OLI) on Landsat 8 collected these natural-color images of the valley on September 20, 2017. The first image is a nadir (straight down) view; the second is a wider view. The third shows the Landsat data draped over topographic data from NASA’s Shuttle Radar Topography Mission (SRTM).

Plastic greenhouses surround Cayambe, a town of 40,000 people. Snow-capped Volcán Cayambe—an active stratovolcano east of the town—towers over the valley. In the second image, three inactive volcanoes lie to the north, including Imbabura. Bands of cloud forests (dark green) ring the lower slopes of the volcanoes.

Ecuador exports nearly $1 billion (U.S.) in cut flowers each year; the main product is roses, though baby’s breath, carnations, and chrysanthemums are also grown. About one-third of the roses that Americans exchange on Valentine’s Day come from Ecuador; almost all of the rest arrive from Colombia. Cayambe’s rise as an epicenter of rose production mirrors the growth of Ecuador’s cut flower industry. In the mid-1980s, Landsat imagery shows very few greenhouses in Cayambe. By 2000, they had sprung up on the outskirts of the town. By 2017, they were ubiquitous. The greenhouses make it possible for rose growers to precisely control temperature and humidity to minimize diseases and pests. 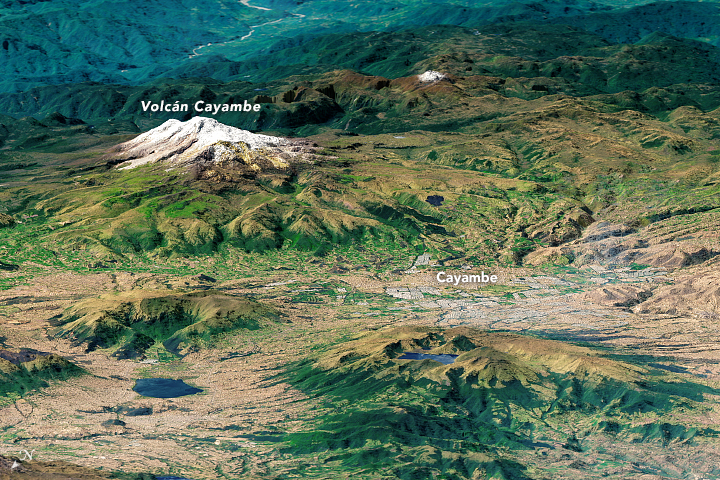 The valley’s location along the equator makes it ideal for growing roses, which benefit from bright light, the roughly equal length of days year round, and the minimal variations in daily and seasonal temperatures. At an elevation of roughly 2,800 meters (9,200 feet), roses also grow slower than they would if grown at lower elevations, leading to larger blooms and more sugar in the stems (which extends shelf life).

Wetlands and irrigation systems provide easy access to water; some of the water supply systems date to pre-Columbian times. The valley’s fertile volcanic soils are another plus, though the location at the foot of an active volcano comes with the risk of ash falls and destructive mudflows known as lahars.

“There are certainly questions and concerns about the environmental and health impacts of the pesticides used and the treatment of greenhouse workers, but the explosive growth of Cayambe’s flower industry—which nobody expected—has had undeniable benefits,” said Knapp. “It has created a huge number of jobs in the area and turned Cayambe into a prosperous place.”