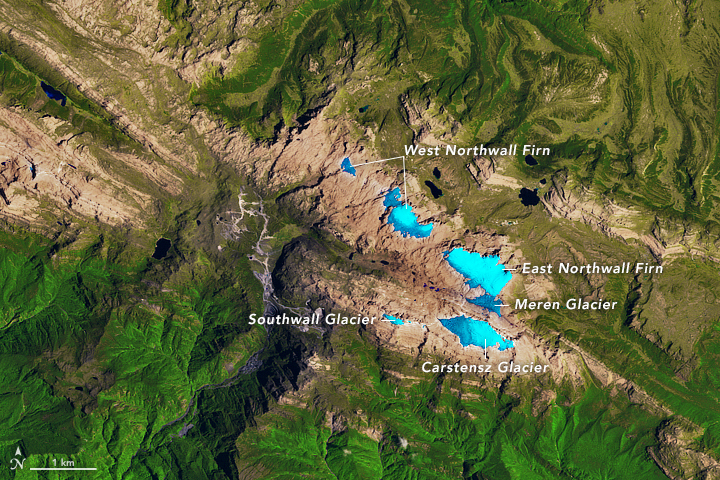 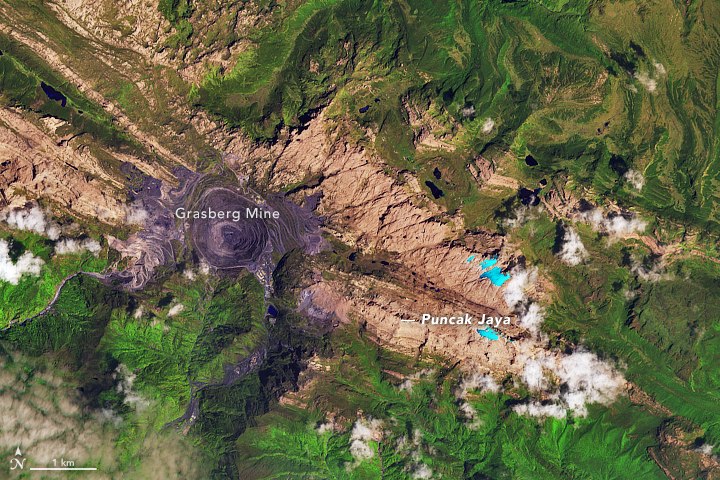 Glaciers in the Tropics, but Not for Long

In the Papua province of Indonesia on the island of New Guinea, rugged mountains compose the Sudirman Range. The tallest peak in this range—Puncak Jaya—rises 4,884 meters (16,020 feet) above sea level. An adjacent peak on the rocky ridge, Ngga Pulu, reaches almost as high at 4,862 meters (15,950 feet). Though the mountains are located just south of the equator, their elevation is high enough and the air temperatures are cold enough to still support a few small areas of “permanent” ice.

The icefields around Puncak Jaya are rare. You won’t find glacial ice for another 4,500 kilometers (2,800 miles) to the north on Japan’s Mount Tate, which lies outside the tropics where glacial ice is more common. Within the tropics, the closest glacial ice can be found 11,200 kilometers (6,900 miles) away on Mount Kenya in Africa. Like tropical glaciers elsewhere in the world, the glaciers on the slopes around Puncak Jaya have been shrinking and scientists estimate they could be gone within about a decade.

This image pair, acquired in 1988 by the Thematic Mapper on Landsat 5 (top) and in 2017 by the Operational Land Imager (OLI) on the Landsat 8 satellite, shows the ice loss. The false-color images are a combination of shortwave infrared, infrared, near infrared, and red light. Ice appears light blue. Clouds are white; exposed rock is brown; and vegetation is green. The gray circular area near the center of the 2017 image is the Grasberg mine.

Satellites continue to be an important tool for scientists who are mapping the changes to these and other disappearing tropical glaciers. Christopher Shuman, a research professor at the University of Maryland Baltimore County, and Compton Tucker of NASA’s Goddard Space Flight Center, are in the process of doing just that. “The ice area losses since the 1980s here are quite striking, visible in the contrast of the blue ice with the reddish bedrock,” Shuman said. “Even though the area still gets snowfalls, it is clearly not sustaining these glacial remnants.”

According to Andrew Klein, a geography professor at Texas A & M University who has studied the region, the decline likely started around the 1850s. Aerial photography collected later within a U.S. Geological Survey report provides glimpses of the ice that existed in the area prior to the 1980s. Satellites now allow Klein and other researchers to observe the ice in detail from afar when they cannot get to the remote site. It also allows them to track the rate of ice loss and estimate the timing of its disappearance.

“Glacier recession continues in the tropics—these happen to be the last glaciers in the eastern tropics,” Klein said. “Fortunately, the impact will be limited given their small size and the fact that they do not represent a significant water resource.”