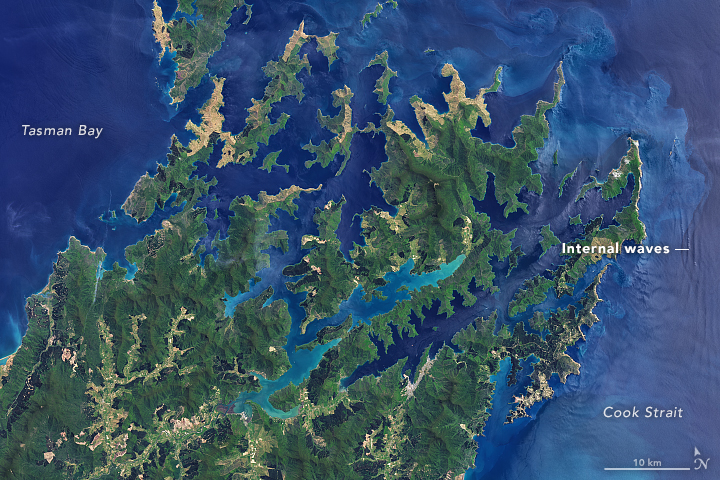 Māori mythology tells us of the origin of the intricate network of inlets, coves, bays, islands, and forested hills around the northern reaches of South Island. According to legend, a boy named Aoraki—along with three of his brothers and a crew—were boating in the open sea when a storm god crashed their vessel on a reef and flipped it. As the brothers scrambled out of the water, a bitter wind froze them in place and turned everything into stone. The overturned hull became New Zealand’s South Island. The petrified body of Aoraki, the tallest of the brothers, turned into Mount Cook; the others became the Southern Alps. The partially submerged prow of the canoe formed the maze-like Marlborough Sounds and other landforms along the northern coast of South Island.

Geologists have a different way of explaining the distinctive landscape. They see evidence that the northern end of coastal mountains in this area began to tilt and sink about 1.5 million years ago. Meanwhile, as global temperatures increased, the rising seas swamped coastal valleys and turned them into features known as rias—drowned, funnel-shaped river valleys that connect to the seas. While sea level has risen and fallen many times with the comings and goings of Ice Ages, geologists think the current coastline began to take shape about 7,000 years ago when the most recent Ice Age ended.

On December 2, 2017, the Operational Land Imager (OLI) on Landsat 8 acquired this natural-color image of the rocky landscape of Marlborough Sounds. The shallowest (light blue) parts of the inlets are estuaries, where sediment from rivers has discolored the water and accumulated on the bottom. Deeper water is darker blue. The inlets that make up the Sounds are mostly shallow; none have depths that exceed 50 meters (160 feet).

But deeper water can be found nearby. Maps of the sea floor show a channel hundreds of meters deep running through Cook Strait. If you follow this channel south, it leads off the edge of the continental shelf and into deep ocean just east of New Zealand’s two largest islands. In fact, the sharp change in seafloor depth near the edge of the continental shelf, along with strong tidal currents, likely produced the long, linear waves visible on the right side of the image.

When tidal currents pull water up against the shelf, differences in temperature and salinity between surface and deeper water layers can create large waves that travel tens of meters below the surface. Though these internal waves do not cause obvious surface swells, they influence slicks of biological materials and oils on the surface that affect how much sunlight gets reflected. These surface slicks reveal the presence of the underlying internal waves. The pattern is especially obvious in areas where the Sun’s reflection off the water—sunglint—is brightest.

Complicated flow and wave patterns are commonplace around Marlborough Sounds and in Cook Strait. In addition to having strong currents, the strait is known for funneling winds into a chokepoint that fuels large surface waves and turbulent seas. As wind-blown waves, tidal currents, and internal waves all interact with the complicated terrain, eye-catching swirls, loops, and other intricate flow patterns emerge as water circulates throughout the inlets.