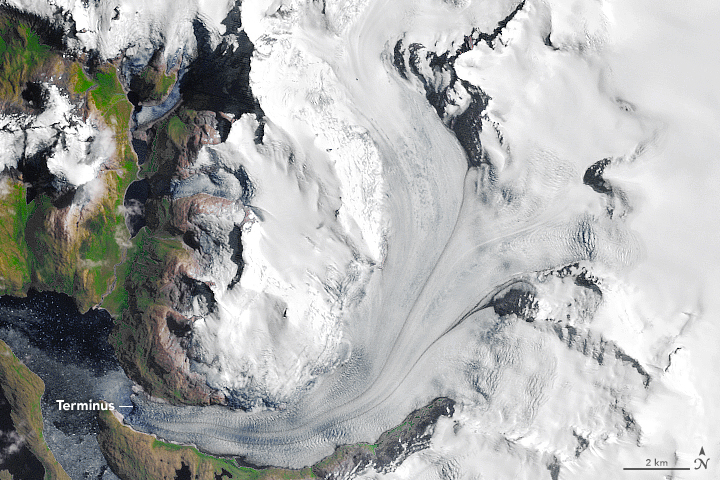 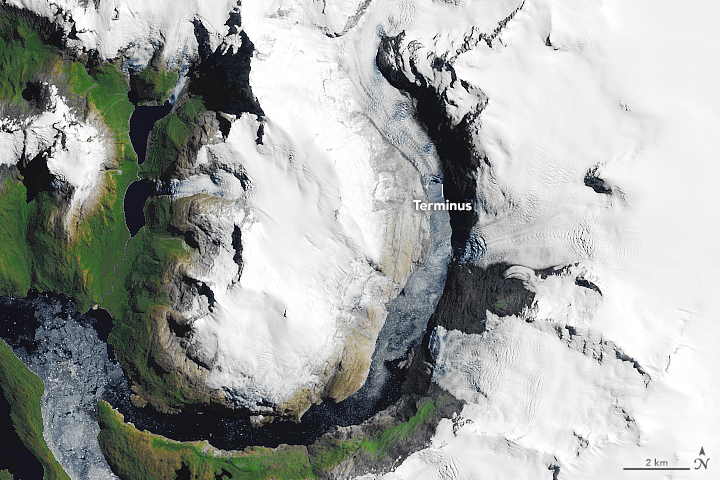 Glacial Retreat at a Non-glacial Pace

Not every glacier on the South Patagonian Icefield has a memorable name like Spegazzimi or Ofhidro. Some flowing bodies of ice are identified simply with the prefix HPS (Hielo Patagónico Sur, which is Spanish for “Southern Patagonian Icefield”) followed by an identifying number.

HPS-12 is one such glacier. Although its name is unassuming, the changes happening here are notable.

Glaciers are thinning and retreating all over the South Patagonian Icefield. Spanning about 13,000 square kilometers across Chile and Argentina, it is the largest contiguous icefield in the southern hemisphere outside of Antarctica. But researchers have noted that “most of the glaciers of the icefield are decaying, with several undergoing ‘catastrophic’ retreat.” HPS-12, located on the western side of the icefield in Chile, has lost about half of its length in three decades.

The change is visible in these false-color images. The first was acquired on January 27, 1985, by the Thematic Mapper on the Landsat 5 satellite; the second was acquired on February 4, 2017, by the Operational Land Imager (OLI) on Landsat 8. Turn on the image comparison tool to see the front of the glacier—its terminus—retreat by about 13 kilometers.

The images combine shortwave-infrared, near-infrared, and green portions of the electromagnetic spectrum. This combination of wavelengths typically makes snow and ice appear cyan and light blue, vegetation as green, and open water as dark blue. These colors have been modified to simulate a more natural appearance so that snow and ice remain white.

In 1985, HPS-12 measured 26 kilometers long. The retreat accelerated in the late 1990s, and by 2015, three glaciers that fed into HPS-12 from the sides were cut off. The retreat—combined with some of the most extensive thinning on the icefield—created new areas of open water in the fjord (dark blue) and exposed rocky fjord walls (brown). By 2017, the glacier was less than 13 kilometers long. According to Mauri Pelto, a glaciologist who wrote about HPS-12 on his blog, “this retreat along with Jorge Montt is the largest in Chile in the last 30 years.”