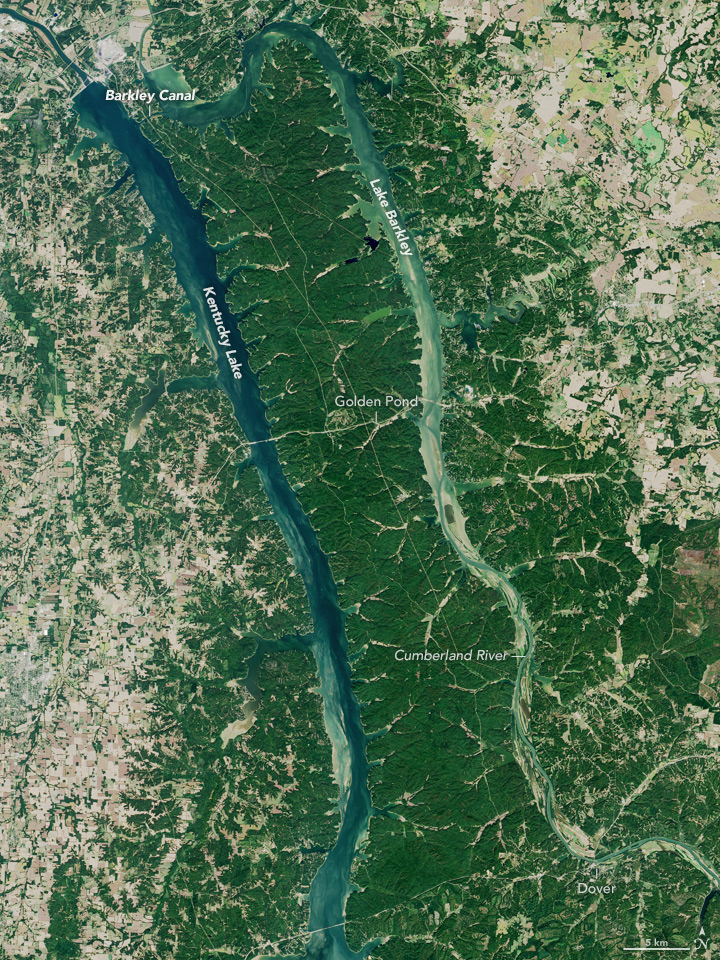 The Land Between the Lakes

In an attempt to control flooding and to generate electricity in rural Kentucky and Tennessee, the Tennessee Valley Authority (TVA) built Kentucky Dam, thereby impounding the Tennessee River and creating Kentucky Lake in 1944. It became the largest manmade lake east of the Mississippi River.

Two decades later, the U.S. Army Corps of Engineers blocked the flow of the nearby Cumberland River as well. With the completion of Barkley Dam in 1966, the waters of the Cumberland piled up into Lake Barkley. In the process of creating the two lakes, residents of several small towns along and between the rivers were moved, and parts of some towns were permanently flooded. A few local roads and railways had to be re-routed.

Engineers also dug out Barkley Canal in order to bring the two rivers and lakes to the same water level. This allowed ships and barges to more easily move goods (without locks) from the Cumberland and Tennessee river valleys toward the mighty Mississippi River. By the time they were done, the TVA and Army Corps had created one of the largest inland peninsulas in the United States.

In the years after the lakes were created, the new peninsula was slowly converted into a recreation area for hunting, fishing, boating, hiking, and camping. Now managed by the U.S. Forest Service, the Land Between the Lakes National Recreation Area includes one of the largest freshwater recreation complexes in the United States. The parkland and lakes attract roughly two million visitors per year. The Operational Land Imager (OLI) on Landsat 8 acquired this natural-color image of the region on October 7, 2016.

Near Golden Pond, some forests have been cleared and re-seeded to return the land to what it likely looked in the 19th century. That grassland prairie also has been settled with elk and bison that once roamed the region. Recreational facilities also include a planetarium and a woodlands nature station. At the southern end of Land Between the Lakes, near the town of Dover, a re-creation of an 1850s homestead includes rare breeds of livestock and plants from that era.