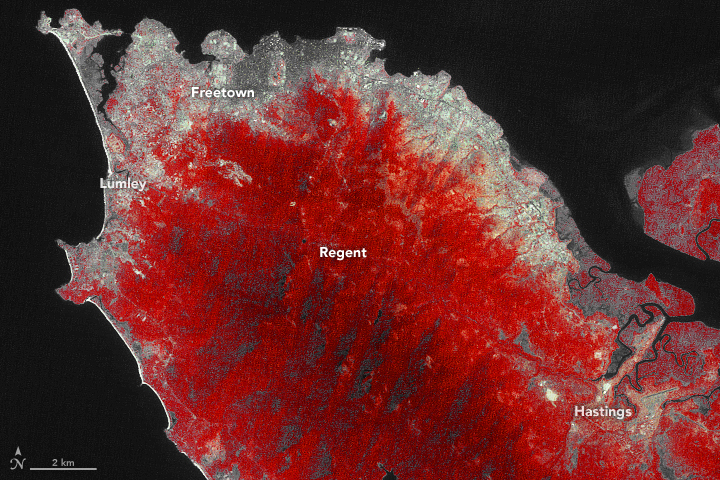 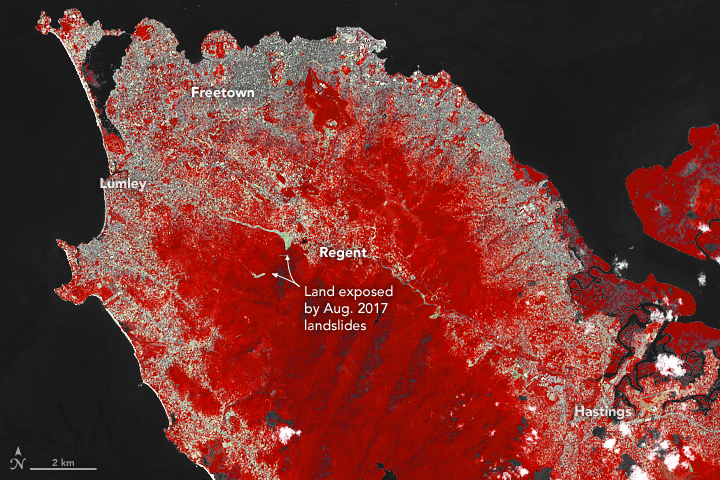 A Growing City and a Deadly Landslide

At 6:50 a.m. on August 14, 2017, the people of Regent heard a low rumbling noise like the hum of a passing airplane. Then there was quiet. A hillside had failed in this mountainous area just beyond Freetown, Sierra Leone.

Ten minutes later, an explosive sound came from the direction of nearby Mount Sugar Loaf. The earth trembled and began to flow. Trees and boulders of all sizes tumbled chaotically. Sparks lit the morning air as metal and rock collided. A river of rust-colored soil plunged into the swollen stream valleys below, which were already filled with floodwater due to several days of intense rain. A destructive slurry of mud, boulders, and tree parts rushed down toward the stream valley, flowing more than three kilometers before draining into the sea near Lumley.

When authorities tallied the loss of life and property, the numbers were sobering. More than 1,141 people died and 3,000 people lost their homes, according to a World Bank assessment. Damage to homes in the area totaled more than $14 million.

Sustained downpours were the immediate trigger for the landslide. Between July 1 and August 14, Freetown received 1,040 millimeters (39 inches) of rain—about three times the norm for that period. However, decades of rapid urbanization in landslide-prone areas, as well as construction along streams where flooding was common, set the stage for the disaster. Joseph McCarthy, an urban planner at Njala University, went so far as to tell Thompson Reuters that: “The major cause of mudslides and flooding is the chaotic development caused by the rapid urbanization of Freetown.”

This pair of false-color Landsat images illustrates the extent of the changes. Forested areas appear red, urban areas are gray, and landslide debris is tan. In 1986, most of the development was in low-lying, coastal areas. By 2017, development had spread widely into mountainous areas. For instance, the town of Regent had just a handful of buildings in 1986. By 2017, it had many more buildings and a population of 28,000 people. Turn on the image comparison tool to see the changes.

In addition to the spread of urban areas, the images also highlight the extent of deforestation—one of the factors that helps trigger landslides—to the south of Freetown. According to one analysis of Landsat imagery led by Lamin Mansaray of the Sierra Leone Agricultural Research Institute, the Freetown region saw its densely forested areas drop from 113 square kilometers in 1986 to 59 square kilometers in 2015—a 52 percent decline.

The city’s population increased from about 500,000 people in 1986 to about 1 million people today. A civil war between 1991–2002 accelerated the city’s expansion. “Before 1991, there was minimal rural-urban migration in Sierra Leone. During the conflict, rural areas were most vulnerable to attacks, and Freetown was by far the safest place to be,” explained Mansaray. “After the war ended in 2002, migration into the capital remained high because most people in rural areas had lost their homes and sources of livelihoods.”