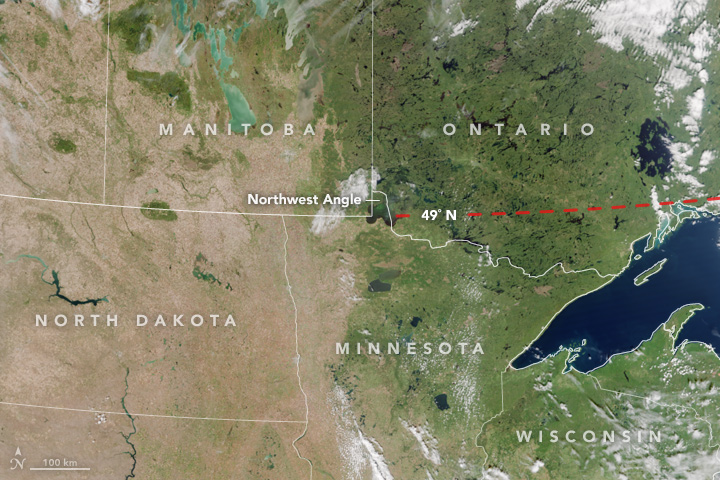 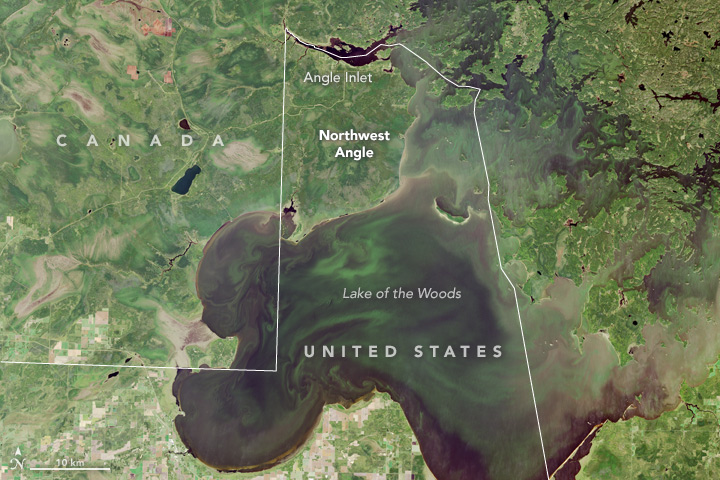 The border between the United States and Canada is the longest between two countries in the world, and it has plenty of interesting quirks, angles, and bits of history. The Northwest Angle of Minnesota is among the quirkiest.

As the northernmost point in the continental United States, Northwest Angle sticks up like a chimney on the roof of Minnesota, reaching into Ontario and Manitoba. This geographic oddity is a result of bad mapping and a century of tough negotiating between the United States and Great Britain.

During the drafting of the Treaty of Paris—the official end to the American Revolutionary War in 1783—negotiators worked out a border from the Atlantic Ocean to the Mississippi River. After cutting across the Great Lakes, the border was to follow smaller lakes and rivers (such as the Rainy) from Lake Superior to Lake of the Woods. The border was then supposed to extend at a northwest angle across Lake of the Woods and cut due west to the Mississippi River. But existing surveys of the area were rudimentary. The mapped shape (like a large egg) and location of Lake of the Woods were quite wrong, and the headwaters of the Mississippi were found to be to the south and west, not due west.

The error became clearer after the Louisiana Purchase, which also came with unspecified borders that required mapping and negotiation. The British proposed extending the U.S.-Canada border to the Pacific Ocean along the 49th parallel (49° North latitude). Through several rounds of treaties, negotiations, and surveys, the lay of the land became clearer, and that Northwest Angle stood out like a sore thumb. Several times in the 19th Century, the British tried to negotiate bringing the Angle back into Canada, but for historical reasons and pride, the United States never wanted to change anything that had been negotiated in the Treaty of Paris.

On September 20, 2015, the Visible Infrared Imaging Radiometer Suite (VIIRS) on the Suomi NPP satellite acquired a natural-color image (top) of the U.S.-Canada border. The dotted red line depicts the 49th parallel. The second image, a close-up of Northwest Angle and Lake of the Woods, was acquired on the same day by the Operational Land Imager (OLI) on Landsat 8.

Northwest Angle today spans 596 square miles, 473 of which are water. Roughly 120 American citizens are spread out along the shores of Lake of the Woods and its islands. The town has no traffic lights, hospitals, or grocery stores; it does have a one-room schoolhouse, the last of its kind in Minnesota. High school students, as well as everyday citizens who want to go shopping, must make a 75-mile overland trek through Canada and back into Minnesota, crossing the international border twice and using gravel and dirt roads along much of the way. The main livelihood for the Angle’s citizens is fishing and hunting, or lodging those who wish to do both. Lake of the Woods is famously rich with walleye, and the fish draws many visitors to the area’s lodges.

An astronaut on a space shuttle shot this photograph of Northwest Angle and Lake of the Woods in 1998.