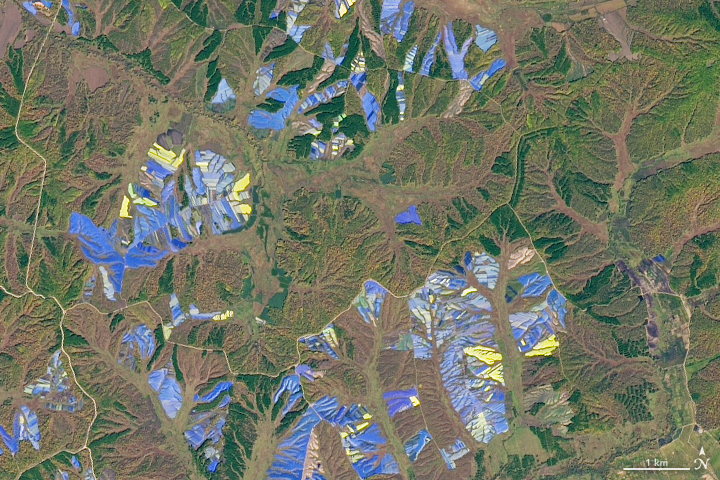 Wild ginseng is an inconspicuous understory plant that grows in shady, moist hardwood forests in Asia and North America. In many Asian cultures, ginseng is thought to have curative properties, a long-held belief that has driven demand so high that it is rare for the plant to be found in the wild in most of Asia.

Instead, a multi-billion dollar market for farmed ginseng has emerged. In some parts of China, ginseng farming is easily visible from space. On September 25, 2017, the Operational Land Imager (OLI) on Landsat 8 captured this image of purple and yellow shade covers for ginseng crops amidst browning hills and farmland in Heilongjiang province in northeastern China. Shade covers are used because the plants cannot tolerate direct sunlight. The image is centered on fields about 20 kilometers northwest of Tieli.

China is the world’s leading producer of ginseng. Much of China’s crop comes from northeastern China, particularly Jilan and Heilongjiang provinces. Other leading producers include Korea, Canada, and the United States.

Beneath the shade covers, it is possible that growers are raising American ginseng (Panax quinquefolius)—a type that is native to North America but popular in China. American ginseng has higher concentrations of ginsenosides—the active ingredients thought to be associated with health benefits—than the species that is indigenous to Asia (Panax ginseng).

The trend toward the cultivation of American ginseng in China has had an effect on American growers, many of whom are located in Wisconsin. As production in Heilongjiang and other parts of China and the world expanded in the 1990s, prices for American-grown ginseng dropped, according to a report from Virginia State University. However, demand for wild American ginseng is as high as ever because it is thought to be particularly potent.