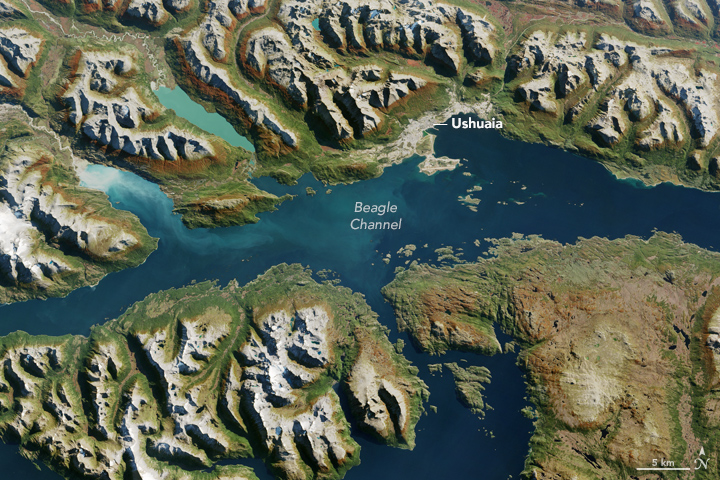 A Gateway to Antarctica

Ushuaia, Argentina, is many things to the growing number of people who live there: the southernmost city in the world, the gateway to Antarctica, and a gorgeous home along a rocky coast. For NASA, the city’s southerly location makes it an ideal place to stage science flights to Antarctica.

The flights are part of Operation IceBridge, NASA’s longest-running mission to map polar ice (now in its ninth year in the Southern Hemisphere). For the first time, flights over the icy continent are being staged from Ushuaia, instead of Punta Arenas, Chile. Read more about this campaign on our blog.

The Operational Land Imager (OLI) on Landsat 8 captured this image of Ushuaia on March 28, 2017. Located at the tip of South America, it is the capital city of Tierra del Fuego province. Port Williams lies across the channel from Ushuaia, but the village is too small to be visible in this natural-color image.

Ushuaia (click to hear the pronunciation) is located about 250 kilometers (150 miles) southeast of Punta Arenas. The city’s proximity to the Antarctic Peninsula means that IceBridge scientists gain an hour of extra flight time over science targets. That’s important because the P-3 aircraft being flown during this campaign has a shorter range than the DC-8 aircraft flown during previous campaigns. The map below represents how flights from Ushuaia might cross the Southern Ocean to observe the Antarctic Peninsula and its surrounding seas and ice. 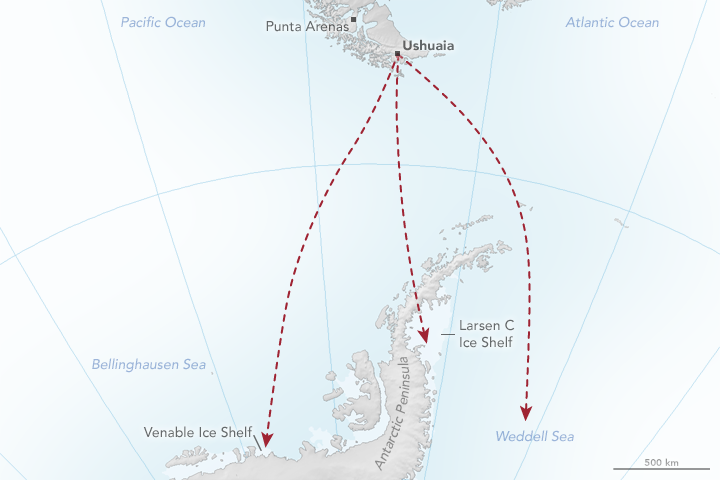 Science flights began on October 29, and the spring weather in Ushuaia has been relatively mild for the first few weeks of the campaign. But as the locals say, you can get four seasons in any given day here. Strong winds, cold temperatures, and heavy rain are not out of the question. Living or visiting here means you should be ready for any kind of weather at all times.

The extent of the urban area visible in the satellite image shows that, indeed, the city covers a sizeable area for such a remote part of the world (23 square kilometers). Census information from 2010 reported the population in Ushuaia to be 56,956—almost double the population in 1991. Still, that’s just a small fraction of the country’s total population of more than 40 million people, most of whom live in Buenos Aires province.

Ushuaia’s port is partially used for industry; container ships dock here, and cargo boxes are stacked in tidy, colorful rows along the shore. Tourism is also important: People come from around the world to hike in Tierra del Fuego National Park, ski in the mountains, cruise to see penguins on Martillo Island, or catch a cruise ship to Antarctica.