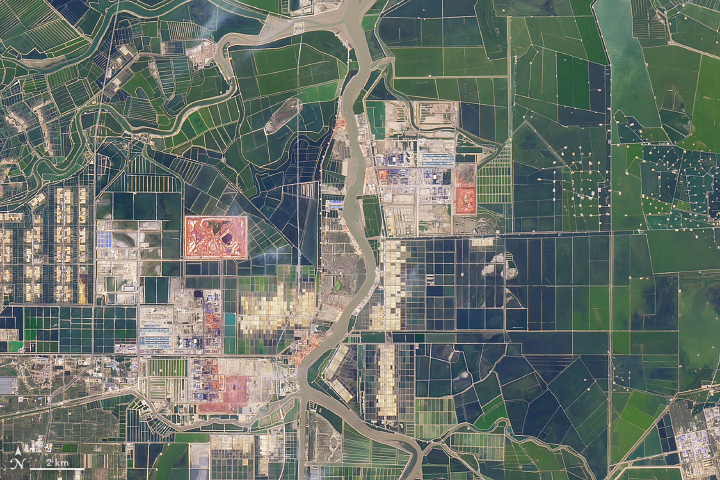 A Very Human Landscape in China

In 1985, this part of Shandong Peninsula in eastern China was an open expanse of tidal mudflats frequented mainly by birds and other wildlife. By 2017, the landscape had been transformed into one that is intensely sculpted by human activity.

The Operational Land Imager (OLI) on Landsat 8 captured this natural-color image on September 8, 2017. The area falls within Binzhou, a prefecture in northern Shandong Province. Seen from above, the landscape is checkered with squares and rectangles, likely aquaculture ponds and brine pools used to produce salt. Dozens of drill pads for oil pumps are visible on the right side of the image. This area falls within the Shengli oil field, the second largest oil field in China.

Heavy industry—likely oil-refining facilities—are visible near the center of the image. Landsat imagery shows that construction of these industrial facilities began in 2012. The drill pads were mostly established in the mid-1990s. Other major industrial products produced in Binzhou include garments, a fuel called coke, heavy machinery, and cement.

In research that uses decades of Landsat imagery to determine where surface water has undergone the most change, this area stands out. Browse the Aqua Monitor and Surface Water Explorer to see how the distribution of surface water has changed in this part of China since the 1980s.