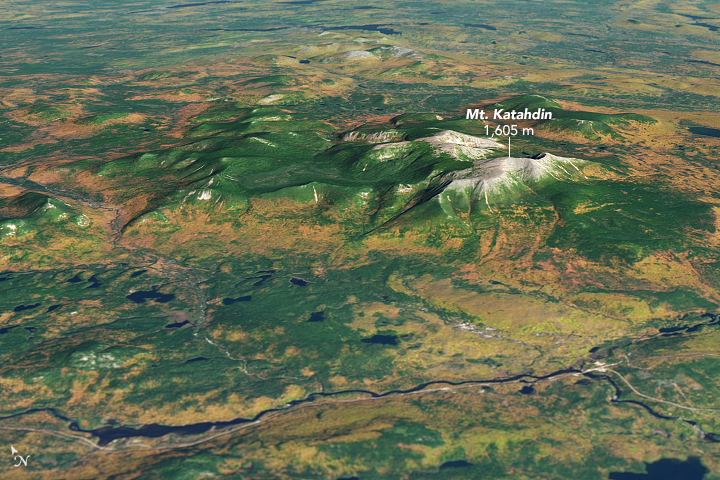 Check Out These Colors, Maine!

As autumn progresses, so does the trail of color across New England. The reds, yellows, and oranges of the season typically emerge first on the deciduous trees and shrubs at higher latitudes and elevations. That was the case on October 13, 2017, when the Operational Land Imager (OLI) on Landsat 8 captured these natural-color images of foliage in north-central Maine.

The top image shows the mountainous part of Baxter State Park, an 200,000-acre (809-square-kilometer) area of protected wilderness. The summit of Mount Katahdin rises to 5,269 feet (1,605 meters), the tallest point in the state. Vegetation growth is stunted on the mountain’s upper slopes and tablelands, which appear light tan. Moving down from the tree line you start to see evergreens, and then deciduous species with magnificent, colorful foliage. When the image was acquired, leaf color was at its local peak for 2017. 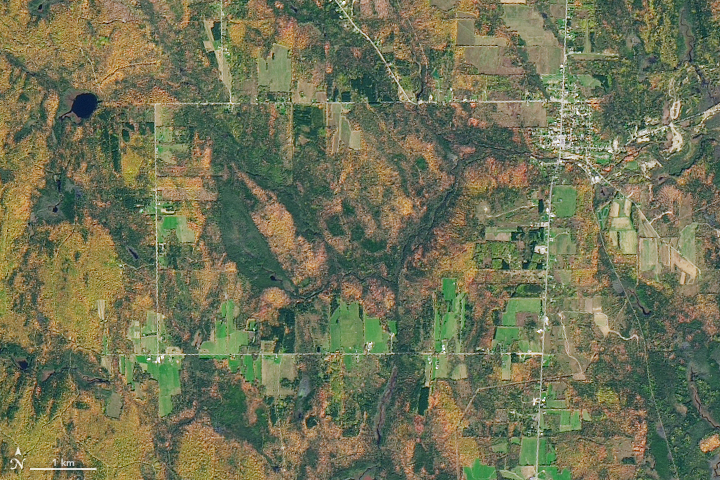 About 25 miles (40 kilometers) east-northeast of Mount Katahdin, the town of Patten, Maine, also bathed in fall color. Notice how farm fields and pastures in this area stay light green in comparison to the dark green evergreens and golden deciduous trees.

Leaf color appears around the same time every year, when daylight grows shorter and triggers plants to slow and stop the production of chlorophyll. But for the best color, leaves need dry weather and cooler temperatures. According to news reports, New England’s foliage this year may not be as vibrant as other years. As of early October, many areas had not yet seen temperatures cool off much, causing leaves to go from green to brown.