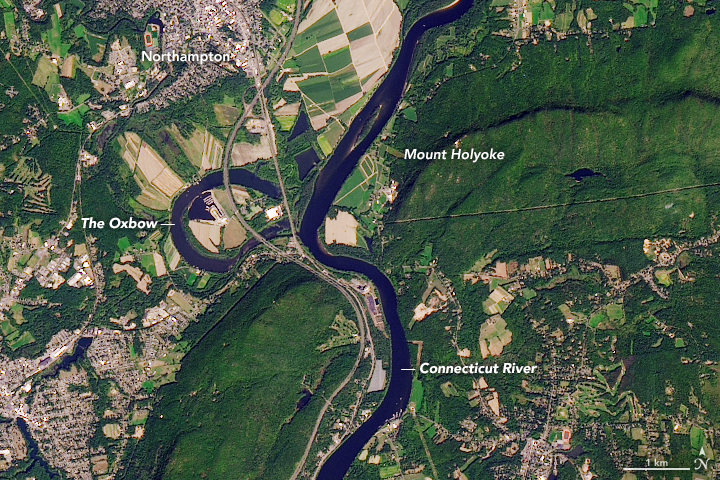 The oxbow on the Connecticut River near Northampton, Massachusetts, holds a distinctive place in art history. The feature is the centerpiece of Thomas Cole’s 1836 masterpiece The Oxbow (shown below)—a painting famous for raising questions about the interplay between civilization and the natural world. The painting juxtaposes untamed forests near the summit of Mount Holyoke with a more pastoral scene of cultivated farmland on the far side of the river.

On April 18, 2017, the Operational Land Imager (OLI) on Landsat 8 captured a top-down view of the same terrain. Though some elements of the landscape are reminiscent of Cole’s painting—such as the largely undeveloped forests on Mount Holyoke—the passage of time has brought significant change to this stretch of the river.

When Cole composed his painting, the oxbow was a sharp meander that was still fully connected to the river. However, in 1840, spring floodwaters burst through the narrowest part of the bend (the area is partially blocked by the hill in the foreground of Cole’s painting) and began to cut the oxbow off from the rest of the river. The construction in 1843 of a railroad bridge between the oxbow pond and the river further separated them. 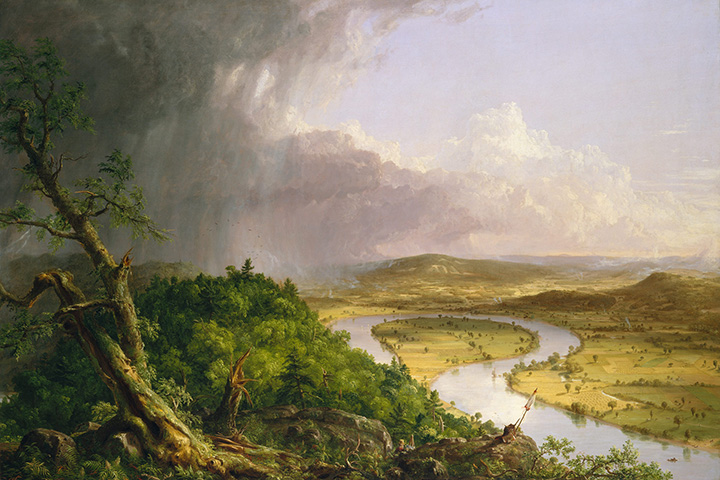 More change came in the 1960s with the construction of Interstate 91, which bisected the oxbow pond and led to the creation of the triangular and diamond-shaped ponds between the highway and the river. Today, the oxbow—the site of a marina—is fed by the Mill River and Manhan River, and is only connected to the Connecticut by a small channel at its south end.

With a long history of seasonal flooding, low-lying areas near the Connecticut and Mill rivers still occasionally see high water. However, the presence of the oxbow pond, the wetlands surrounding it, and a system of levees along the southern and eastern edges of Northampton have served as important buffers against devastating floods similar to those that swamped the town in 1936.