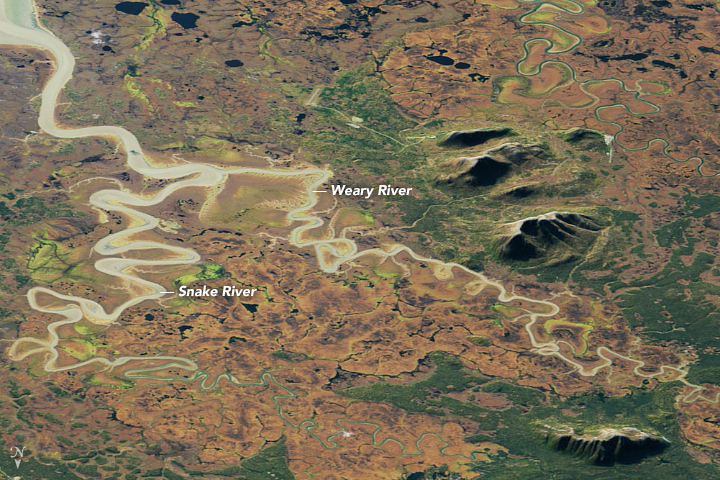 A Blaze of Color in Alaska

It is not easy to get a clear view of the lowlands around Nushagak Bay and the foothills of the Ahklun Mountains. In the fall, clouds usually block satellites from seeing this remote part of southwestern Alaska because the Aleutian Low sends a regular stream of storms into the west coast.

When the skies cleared on September 29, 2017, they offered the Landsat 8 satellite a treat: a spectacular view of colorful deciduous vegetation juxtaposed with pockets of evergreen along the Weary and Snake rivers. Water stained brown by either tannins or sediment flowed down several rivers into Nushagak Bay, where it mixed with the bluer waters of the ocean. This natural-color Landsat image was draped over elevation data from the Advanced Spaceborne Thermal Emission and Reflection Radiometer (ASTER) on Terra to highlight the shape of the landscape (topography). The image below shows a broader view of the area. 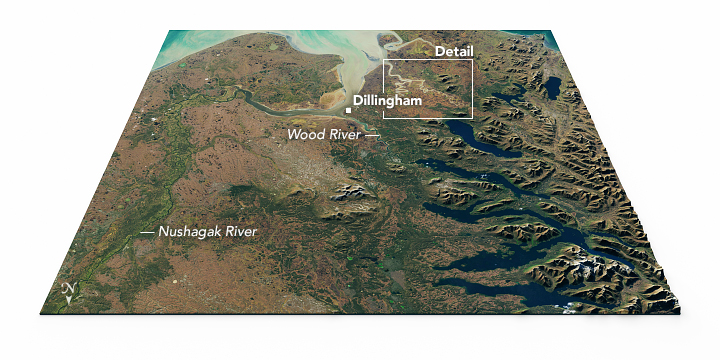 The image highlights the complexity and diversity of the region’s vegetation. In an area where humans have little impact on the landscape—the largest town in the area, Dillingham, is home to 2,300 people—competing forests, shrublands, grasslands, mosses, and lichens all find room to thrive. A land cover map compiled by the University of Alaska distinguishes some of the ecological niches for vegetation in the area. Pockets of deciduous trees—likely aspen, birch, and balsam poplar—grow along with stands of evergreen spruce trees. The rivers, as well as the lowlands around the Nushagak Bay, appear to be rich with deciduous shrubs.

In autumn, the leaves on deciduous trees and shrubs change colors as they lose chlorophyll, the molecule that plants use to synthesize food. However, chlorophyll is not a stable compound and plants have to continuously synthesize it, a process that requires ample sunlight and warm temperatures. When temperatures drop and days shorten, levels of chlorophyll do as well.

In this part of Alaska, fall colors generally being to appear in August.