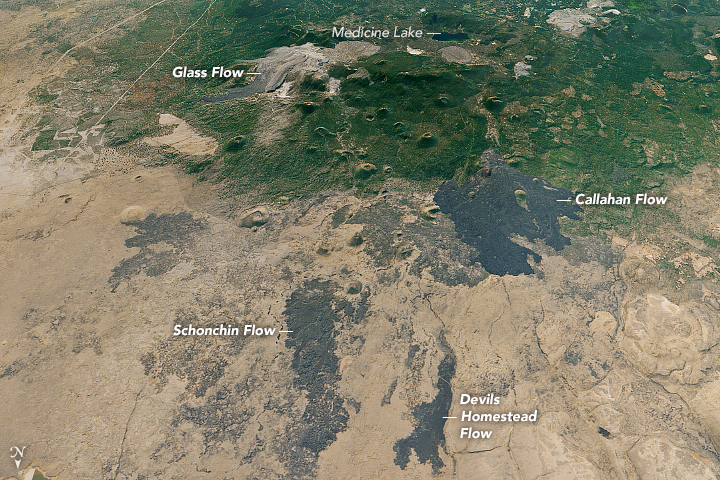 More than 700 caves wind through the hardened lava flows in northeastern California’s Lava Beds National Monument. The caves—about 20 of which can be explored by foot—are not directly visible to NASA satellites, nor are the bats that find refuge there. However, satellite images show how the lava flows fit into the wider volcanic landscape.

On October 4, 2017, the Operational Land Imager (OLI) on the Landsat 8 satellite captured this natural-color image of Lava Beds National Monument and surrounding area. The image was draped over terrain data from the Advanced Spaceborne Thermal Emission and Reflection Radiometer (ASTER). Note that the scene was rotated to create this image, so north is down.

The dark gray flows contrast with the surrounding desert and the more densely vegetated land. The lava flows originally came from Medicine Lake volcano, which at 2,412 meters tall might appear unassuming compared to other volcanoes in the Cascade Range. (For comparison, the nearby Mount Shasta has an elevation of 4,322 meters.) In terms of volume and area, however, Medicine Lake is California’s largest volcano. Its broad, gentle slopes span 25 kilometers in the east-west direction, and another 40 kilometers in the north-south direction.

About 100,000 years ago, a series of eruptions caused the mountain’s center to collapse, forming a huge caldera. That caldera is partially filled now with the water of Medicine Lake, visible as the dark blue area inside the rim. Lava flows extend from the caldera in every direction for more than 50 kilometers and vary in composition. (See this geologic map for details.) Cinder cones also dot the volcano’s flanks.