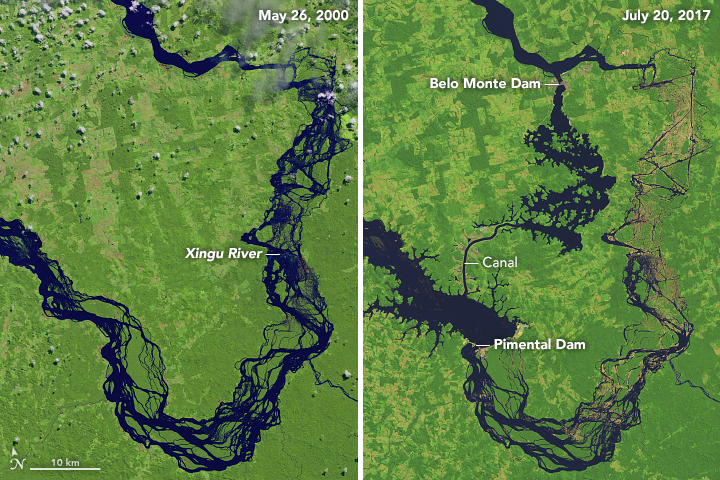 A major tributary of the Amazon River has been dramatically reshaped. The change has an entirely human cause—construction of the Belo Monte Dam complex on the Xingu River in northern Brazil.

The Enhanced Thematic Mapper Plus on the Landsat 7 satellite captured a false-color image (left) of the site of the future river and dam complex on May 26, 2000, when the Xingu River still flowed freely. The dam project was first considered in the 1970s, but construction did not start until 2011.

By early 2016, after the primary dam (the Pimental) was first closed, water pooled up to form the main reservoir. Turbines soon came online and by April 2016 started supplying electricity to the grid. The complex now consists of multiple dams, dykes, canals, and power stations. The false-color image (right) shows the area on July 20, 2017, as observed by the Operational Land Imager (OLI) on the Landsat 8 satellite.

Water in the Xingu River generally flows northward toward the Amazon River. In these views, however, it temporarily dips southward while flowing around a 100-kilometer river bend—the Volta Grande do Xingu. Only about 20 percent of the original river flow now makes the journey around this bend.

The reduced flow along the bend has produced new dry areas (tan and orange). The drying is reported to have affected the aquatic life—such as turtles and fish unique to the Volta Grande—and a number of indigenous tribes living in the area.

There is also a notable change between the two images in the amount of forested and agricultural land. According to image analysts with the Monitoring of the Andean Amazon Project (MAAP), some of the newly flooded areas were already deforested. 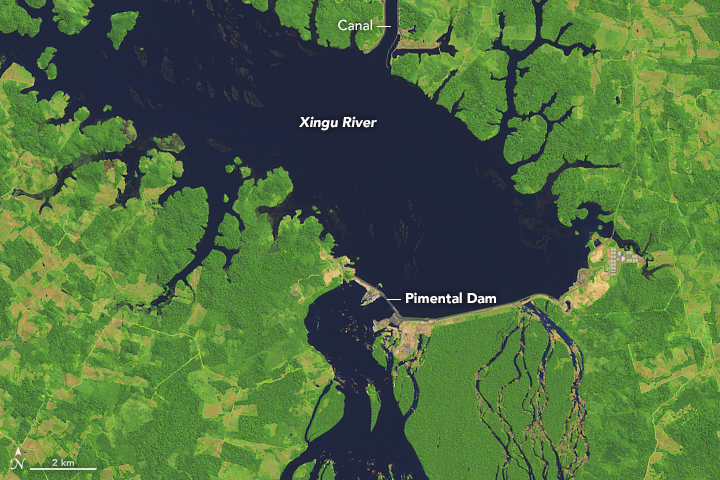 The dam now diverts about 80 percent of the flow into the main reservoir, through a canal, and into a secondary reservoir. The false-color Landsat 8 image above shows a detailed view of the main reservoir and part of the canal on July 20, 2017. The newly flooded areas span about 200 square kilometers (49,000 acres), according to an assessment by MAAP experts.

When the dam becomes fully operational in 2018, it will have a maximum capacity of 11,233 megawatts—the fourth-largest hydroelectric plant in the world. The electricity actually generated on average will be much less, about 4,500 megawatts according to one estimate, but will help support the energy needs of economic growth in Brazil.