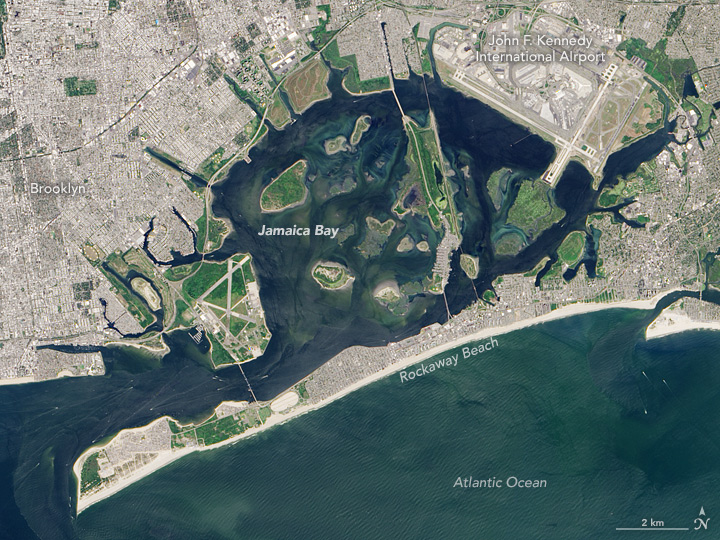 An Unlikely Corner of New York

Nestled under the crook of Brooklyn, Jamaica Bay is a place as different from New York City as you can find. A rare haven amid the urban gridlock, it borders some of the most densely populated counties in the United States.

On August 26, 2016, the Operational Land Imager (OLI) on the Landsat 8 satellite captured a natural-color view of the bay. The image was acquired at 11:39 a.m. Eastern Time, just before the low tide. Sediment clouds the water, a result of the ebbing tide passing between a handful of small islands in the bay. Just across the peninsula, south of the Rockaways, larger waves create a marbled pattern on the Atlantic Ocean.

Despite the calm of the bay, there are constant reminders that this is, in fact, New York City. A road and train track cuts through the center of the bay, along the Jamaica Bay Wildlife Refuge. Dozens of times a day, the subway clatters through. Planes roar overhead on their arrival and departure from John F. Kennedy International Airport, built on marshland at the bay’s northeastern edge. In summer months, city dwellers laden with towels and sunscreen pass through the bay on their way south to beaches in the Rockaways.

But Jamaica Bay is a destination in its own right. Each year, thousands of bird watchers and kayakers come here for the wildlife. Part of the Gateway National Recreation Area (wider view below), the bay is home to hundreds of native species, including horseshoe crabs and nesting birds like the osprey. Conservation groups are working to make the bay’s waters even cleaner. Long plagued by pollution, the bay has been a focus of efforts to repopulate the city’s waters with oysters. In 2016, seeds for 50,000 of the mollusks were planted in its waters. 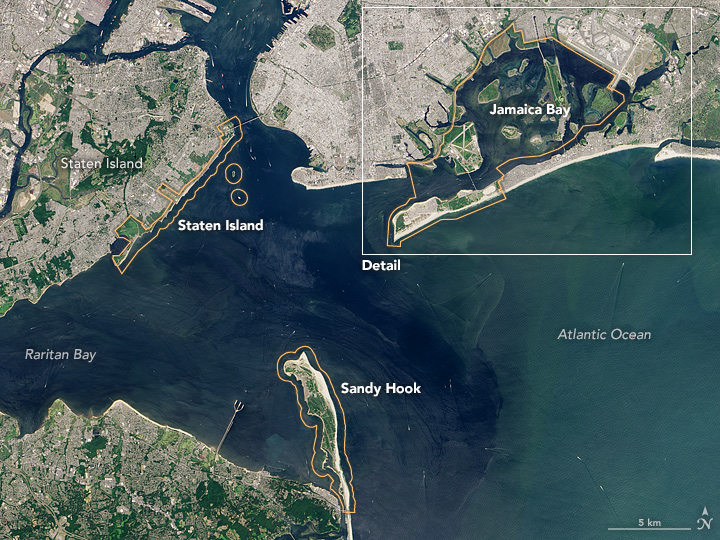