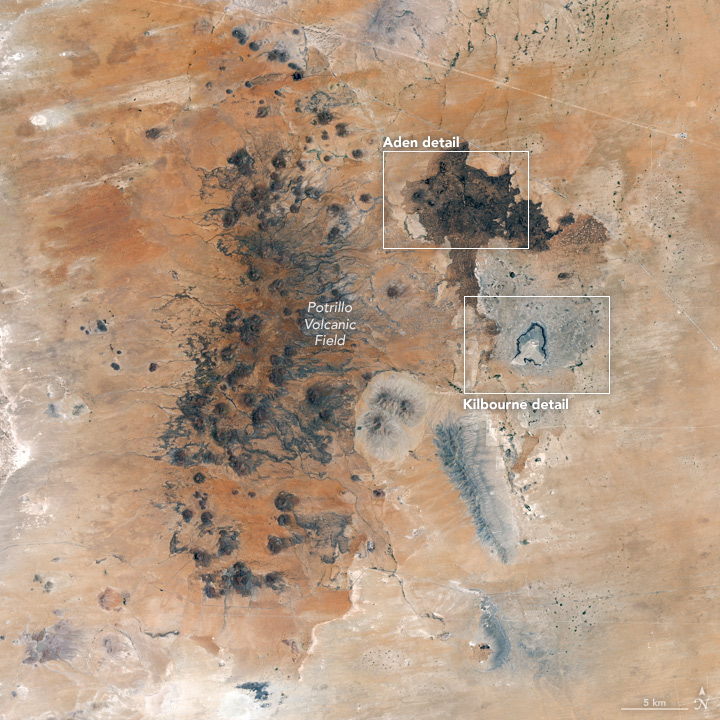 Preparing for the Moon and Mars at Potrillo

Some of the most forbidding places on Earth are destinations of choice for researchers who study other rocky planets and moons. Known as planetary analogue sites, these earthly locations can give scientists a venue for testing their instruments and scientific theories in extreme conditions that approximate otherworldly environments. The goal is to know how everything works so that astronauts are well prepared when they explore new worlds with these tools.

The Potrillo volcanic field is one such testing ground. Located southwest of Las Cruces, New Mexico, and west of El Paso, Texas, Potrillo occupies more than 1,000 square kilometers (400 square miles) near the U.S. border with Mexico. Its parched lands are part of the Chihuahuan Desert, which covers much of northern Mexico and stretches all the way to Albuquerque.

Potrillo is considered dormant now, with its last volcanic activity occurring about 20,000 years ago. Stained black by basalt, the area offers a smorgasbord of lava flows, craters, and cones from both explosive and effusive volcanoes. This diversity of volcanic features makes Potrillo appealing to planetary geologists.

In the summer of 2017, researchers traveled to Potrillo to conduct simulated field excursions as part of the Remote, In Situ, and Synchrotron Studies for Science and Exploration (RIS4E) project. They evaluated the kinds of instruments that could be used by future astronauts to study volcanic features on the surface of the Moon, Mars, or other rocky bodies. The images on this page show Potrillo as observed on June 17, 2017, by the Operational Land Imager on Landsat 8.

Within Potrillo, the team selected two contrasting sites: Kilbourne Hole and Aden Crater. Kilbourne was chosen for a similar purpose more than four decades ago during the Apollo program. It was one of several locations where astronauts practiced identifying and collecting geological samples to bring back from the Moon. 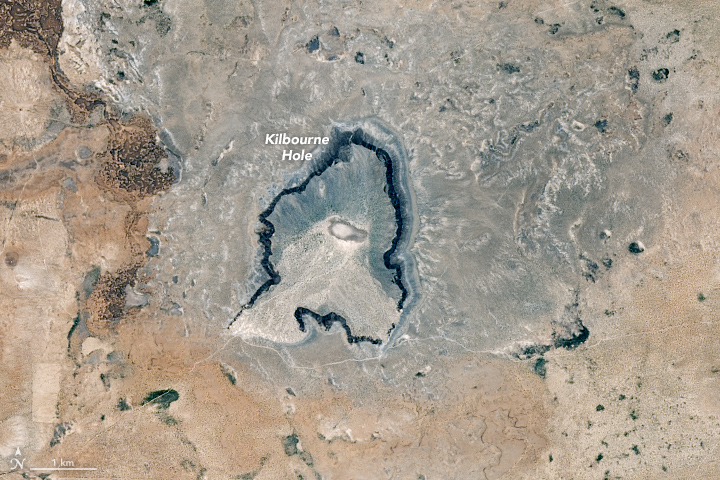 Kilbourne Hole is a maar crater and one of Potrillo’s most distinctive features. It was created about 24,000 years ago by the explosive interaction of hot magma and an aquifer. Magma rising from deep within the Earth heated the underground water, producing steam. Pressure built up, culminating in an explosion that blew out an irregularly shaped hole more than a mile across, 1.7 miles long, and hundreds of feet deep. The blast scattered material far and wide and exposed layers of rock that preserved the history of Kilbourne’s bygone water.

Among geologists, Kilbourne is also known for its xenoliths—rocks that harbor bits of crust or mantle material. Several kinds of xenoliths are found in and around Kilbourne, especially those containing olivine, the greenish mineral of the gemstone peridot. The presence of olivine can indicate material from the mantle, and olivine-rich rocks were among those brought back from the Moon by the Apollo missions. 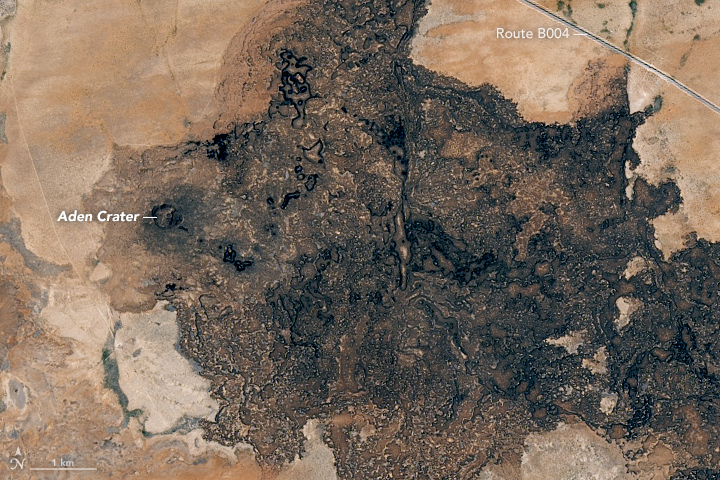 Aden Crater is one of Potrillo’s shield volcanoes, formed by a series of effusive eruptions that ended about 16,000 years ago. The lava seeped out over time, and the flows stacked on top of each other, creating a gently sloping cone. The crater became famous in the late 1920s after a fossilized ground sloth, later determined to be about 11,000 years old, was discovered in a lava tube along the crater rim.

The presence of pits and lava tubes is the reason that the RIS4E team chose to work at Aden. Lava tubes on other planets could preserve unique rock types and environmental conditions, and perhaps even pristine samples that would be ideal for scientific study. In addition, lava tubes could be used to protect future astronauts, their food, and hardware from radiation and harsh environments. RIS4E was designed to address how to determine which holes in the ground are just pits, which might lead to safer environments, and which ones can be safely explored.

The diverse geology in the Potrillo volcanic field also provides opportunities to study a range of planetary science and exploration topics. Potrillo’s volcanic heritage is attributed to its position on the outskirts of the Rio Grande Rift. Although the famous river flows there, this 29-million-year-old valley was not carved by water. Instead, the rift is a result of Earth’s crust being stretched in an east–west direction and weakened by hot rock rising from deep below the surface.