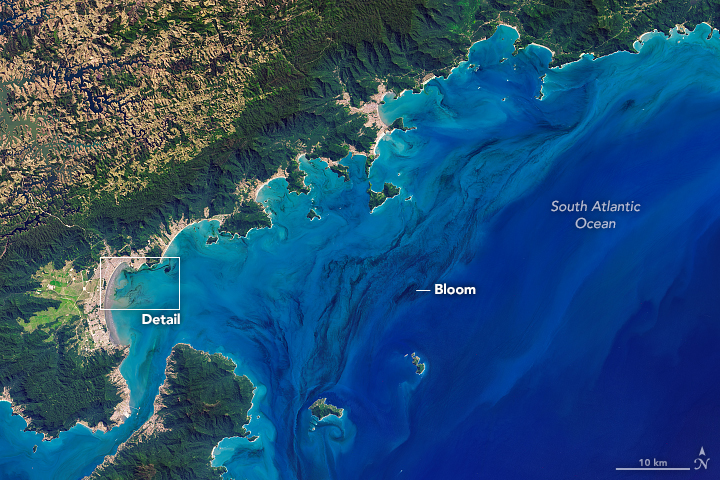 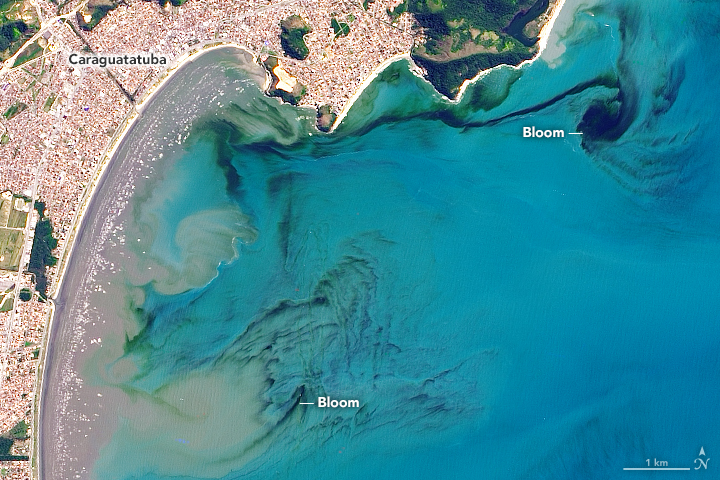 In early September 2017, ocean scientists noticed something swirling in the waters off the coast of the Brazilian state of São Paulo. The sinuous threads of darkness amid the blue Atlantic Ocean were not caused by oil; they were the result of a phytoplankton bloom.

The Operational Land Imager (OLI) on the Landsat 8 satellite captured these images on September 5, 2017. The first is a wide view showing blooms spanning more than 100 kilometers (60 miles) off of São Paulo state. The second image shows details of the bloom near Caraguatatuba.

The dark colors are probably high concentrations of dinoflagellates, according to researchers at the University of São Paulo. Analyzing water samples collected from Caraguatatuba Bay and from the channel between the Ilhabela archipelago and the mainland, they identified the species as likely to be Gymnodinium aureolum.

“But, this is a complicated species to identify,” said Aurea Maria Ciotti, a scientist at the university’s Center for Marine Biology. She and others are awaiting the results of additional tests to confirm the identification. “Blooms here are very uncommon—this is the first time for this species as far as we know.“

In January 2014, a bloom of a different species—Myrionecta rubra—appeared as dark patches that spanned about 800 kilometers (500 miles) of the waters near Rio de Janeiro. Both the 2014 and 2017 blooms appear dark in satellite images for the same reason; the high concentration of heavily pigmented cells darken the water and less light is reflected directly back toward the satellite.