Secrets Beneath the Sand

Today’s story is drawn from our newest feature article: Peering through the Sands of Time: Searching for the Origins of Space Archaeology.

For centuries, if archaeologists wanted to find an ancient or mythical site, they trudged through desert sands or rainforest thickets armed with little more than rumors and hand-drawn maps. They worked from historical accounts and biblical texts and a lot of educated guesswork.

But all of that changed in the late 20th century when some of them began using a new tool: remote sensing. As satellite imaging—natural-color, false-color, and radar—evolved and became more accessible, a scientific community that had once measured the rise and fall of civilizations based on a few archaeological dig sites was suddenly turning up features hundreds or thousands of kilometers long.

By looking down from above, archaeologists can survey thousands of kilometers of a landscape from home and they can start to investigate potential dig sites without actually digging. They can even search next to existing archaeological sites for evidence of other hidden structures. For many modern archaeologists, remote sensing tools have become as valuable as carbon dating.

The pair of images above show a desert region of Oman as it appeared from space in 1994. The top image comes from the Shuttle Imaging Radar-C (SIR-C) instrument that was flown on the space shuttle. The second image was acquired by the Thematic Mapper on the Landsat 5 satellite. Note how the radar image highlights features that do not necessarily stand out in color imagery.

Such images once aided early pioneers of space archaeology as they searched for the lost oasis city of Ubar. For several hundred years, Ubar grew wealthy as an outpost along frankincense trade routes. But according to legends, the people of the city behaved wickedly, provoking divine punishment. The city disappeared into the desert sands about 1500 years ago.

An unlikely band of archaeology aficionados came to NASA in the 1980s and asked for help in finding the lost city. They had read about how Jet Propulsion Laboratory scientists had discovered unprecedented underground details beneath the Selima sand sheet, a vast expanse of desert in Egypt. So they asked NASA to collect some images of the Arabian Peninsula in areas cited by historical texts.

Radar imagers send out pulses of radio waves and collect the return signals (like echoes) after the waves bounce off of surfaces on the land and sea. The smoothness, roughness, and density of a surface all affect what the instrument can “see” in the return signal. Unlike optical instruments, which can only see the surface, radar can penetrate some materials such as sand. 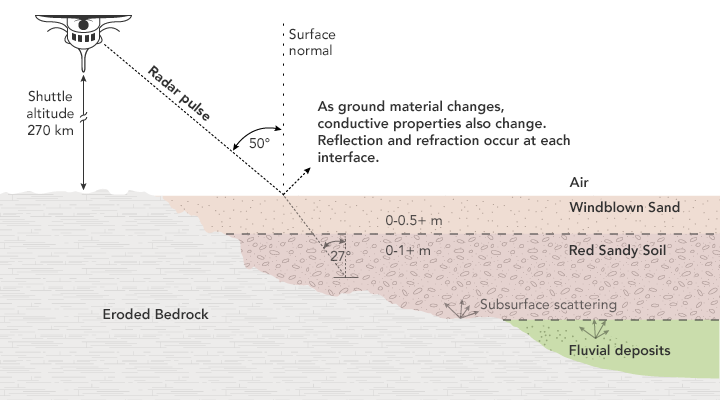 The shuttle radar imagers allowed researchers to see ancient trade routes and other interesting features buried within the Rub’ al-Khali, or “Empty Quarter.” In ancient times, some of this land may have been green and vegetated, resembling a savanna.

Read more about the search for Ubar and about the development of remote sensing tools in Peering through the Sands of Time.