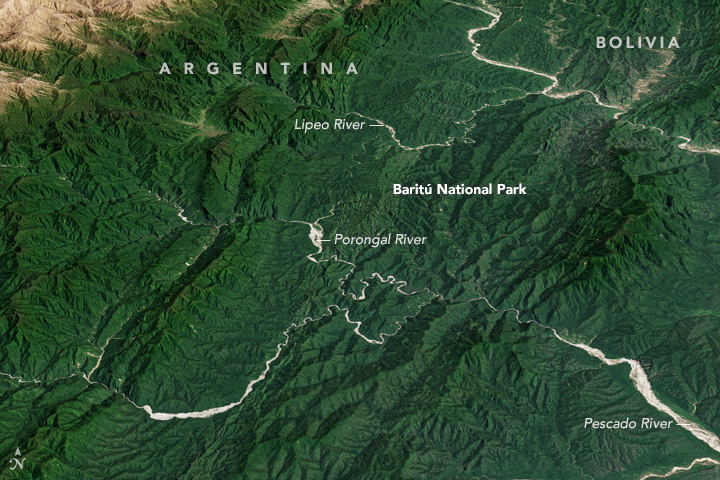 Baritú National Park is a remote, difficult-to-access landscape, a place of steep hillslopes covered in tropical creepers and waterfalls. The rugged terrain changes markedly in the space of a few meters, as the ridges of the Andes Mountains give way to tropical forests.

A protected area inside Argentina, Baritú belongs to Las Yungas ecoregion, a forested stretch along the eastern flank of the Andes. The national park is accessible by road from neighboring Bolivia—and only with a guide and an all-terrain vehicle.

From space, the park appears deep green, with a few of the spines of the Andes peeking through the dense cover of vegetation. The image above shows the park on October 31, 2016, as observed by the Operational Land Imager (OLI) on the Landsat 8 satellite. The image was draped over terrain data from the Advanced Spaceborne Thermal Emission and Reflection Radiometer (ASTER).

Created by Argentina in 1974, the park encompasses roughly 720 square kilometers (280 square miles) and a variety of habitats. Mountain ranges here rise to more than 1,100 meters (3,700 feet), a product of tectonic activity—in this case, the Nazca plate converging with and pushing up the crust of the South American plate.

At lower elevations, the climate is hot and humid. As one website about the park describes it, “to be inside the tropical forest is like being in a hot tub, because the sunlight seldom passes through the dense vegetation, and the smell of the leaves that carpet the ground is so intense.” As a result of frequent, heavy rains and thick cloud cover, the area is called the nuboselva or “cloud forest.”