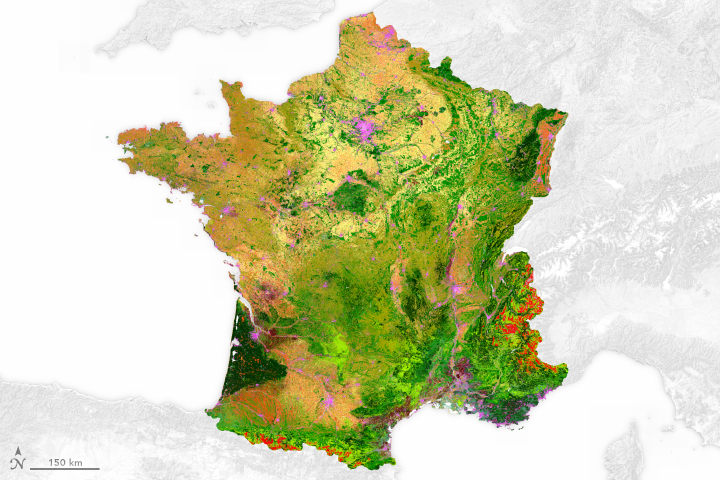 There are myriad ways to represent Earth’s surface: maps of roads, topography, or temperature all convey information about some aspect of the planet. Now, satellite-derived maps of land cover are becoming more detailed than ever and could help scientists gain insight into some key environmental questions.

“Earth’s surface changes very quickly, and having an accurate picture of it is essential,” said Jordi Inglada, a researcher at the Center for Space Studies of the Biosphere in Toulouse, France. “How many forests have been lost to urban settlements? Are lakes in a particular area drying out? Are coniferous forests disappearing in lower latitudes because of global warming?”

Visiting a remote research site is not always feasible. Even poring over dozens of satellite images on a computer screen can be tedious, Inglada noted. Maps of land cover have been updated infrequently because producing them traditionally required a person to manually find and select cloud-free satellite images. But Inglada and colleagues have found a way to fully automate the process, demonstrating that detailed maps can be generated quickly.

The map above is the result of the new, automated approach. This map combines data from all images of France acquired in 2014 by the Operational Land Imager (OLI) on the Landsat 8 satellite. A computer program first detects and removes artifacts such as clouds, and then a classification technique is applied to the remaining data to generate a map in less than 12 hours.

“The originality of our approach is that we use all available images during a year,” Inglada said. For Landsat, that means one image every 16 days, or 22 images per year for any place on Earth. Inglada’s method relies on this abundance of images to build up a time series for landscapes measuring 30 by 30 meters (the equivalent of one Landsat-8 pixel).

The evolution of the signal in each pixel—mainly information in the infrared, which is invisible to human eyes—allowed the researchers to distinguish types of surfaces that otherwise would be impossible to separate from one another. How the signal in each pixel changes over time carries an abundance of clues about which land surface type is contained in a pixel—much more information than can be learned by simply looking at the color of a pixel at a fixed point in time.

In this way, the scientists could differentiate between 17 different land cover types. Classifications include a range of artificial areas, including places where people have built up cities and transportation infrastructure. They could also distinguish between types of agricultural areas, and forested and semi-natural areas. 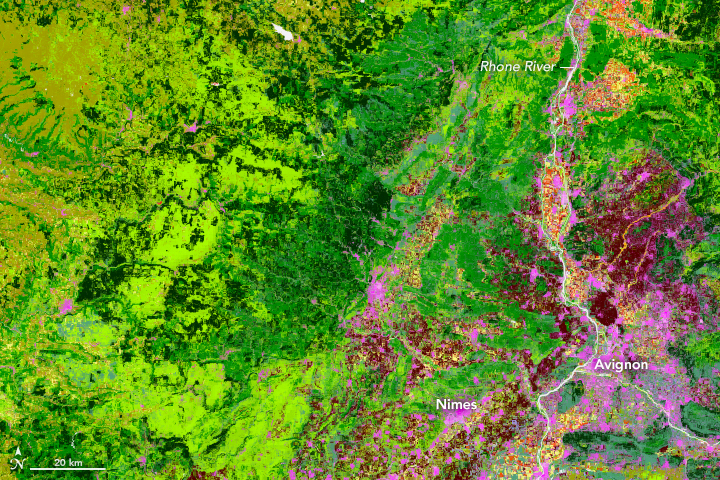 The second image shows a detailed view of the area around Nimes and Avignon. Artificial areas are shades of pink. Agricultural areas include annual summer crops (dark orange), which are mainly corn and sunflower; annual winter crops (yellow) are mainly wheat, barley, and rapeseed. The data can even differentiate between areas planted with fruit trees or shrubs (lavender) and vineyards (maroon).

“I can spend hours looking at the map,” Inglada said. “Seeing the Earth surface with this detail is impressive and shows the beauty of our planet.”