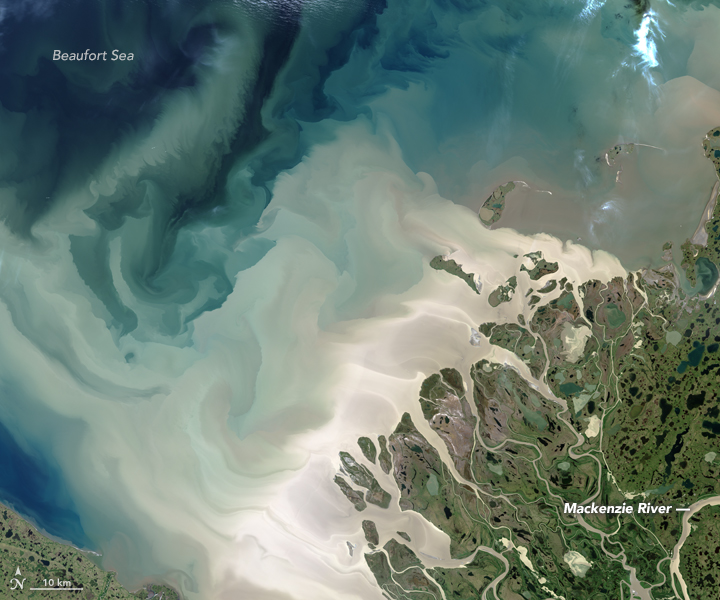 The Operational Land Imager (OLI) on the Landsat 8 satellite acquired this image of the Mackenzie Delta on July 19, 2017. At the time, the Beaufort Sea was colored with milky, tan brush strokes of sediment in various levels of dispersal after pouring out of the river.

The Mackenzie is the largest and longest northward-flowing river in North America, and the second largest on the continent (after the Mississippi). The watershed drains a huge, but mostly unsettled portion of Canada; population density along the 4,200 kilometer (2,600 mile) river is just 1 person per square kilometer.

About 7 percent of the fresh water that flows into the Arctic Ocean each year comes out the Mackenzie and its delta, and much of that comes in large pulses in June and July after the freshet—when inland ice and snow melts and floods the river. The spring flood carries with it tremendous amounts of dissolved organic material and sediment.

“The freshet pushes out a lot of material, and most of that sediment is derived from erosion of the Rocky Mountains through the Liard River, a major tributary to the Mackenzie,” said Bernhard Peucker-Ehrenbrink, a marine chemist from the Woods Hole Oceanographic Institution. “The erosional debris is mostly coming from old sedimentary rocks (shales, sandstones, limestone) in the Rocky Mountains. This is fine-grained suspended material that the river pushes out into the coastal ocean. The fact that you see some dispersion in the Beaufort Sea indicates that the delivery has been going on for some time.”

In a study published in 2014, a NASA-led research team demonstrated that fresh water flowing from rivers into the Arctic Ocean can have a significant effect on the annual extent of sea ice cover. Warm water discharges can accelerate the melting of sea ice near the coast. It also can have a wider impact on climate by creating more open water, which absorbs more heat from sunlight.