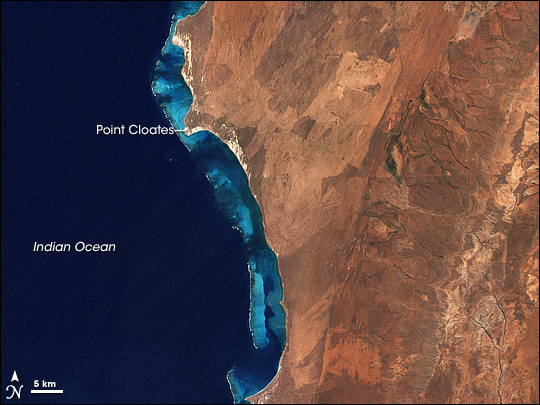 Ningaloo Reef, along the shore of Western Australia, is Australia’s largest fringing coral reef. At roughly 300 kilometers (185 miles) long, it is also the world’s only large reef located so close to a landmass. At its point closest to the continent, the reef is just 100 meters (330 feet) from shore; at its farthest point, it is less than 7 kilometers (4.3 miles) away.

On July 25, 1999, NASA’s Landsat 7 satellite captured this photo-like image of Ningaloo Reef. Clear skies allow an unobstructed view of deep blue ocean water, and varied shades of brick red and beige in the coastal area of Western Australia. The reef is easily spotted in this image, thanks to the electric blue color of the water. The relatively shallow depths of these waters cause the lighter color. Along the shore, Point Cloates stretches seaward, surrounded by pale waters that overlie a reef.

Ningaloo Reef and the surrounding waters became Ningaloo Marine Park in 1987. The park is home to sharks, manta rays, dolphins, whales, more than 250 coral species, and numerous tropical fish species, including some of the world’s most colorful.