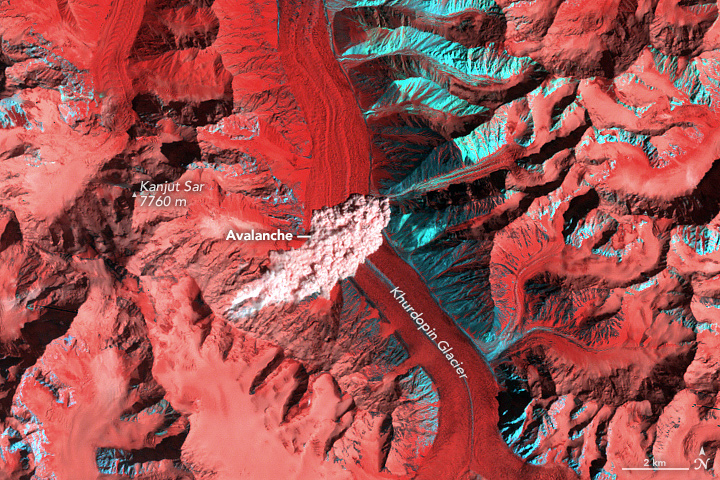 A Stroke of Luck

Large powder avalanches can easily accelerate to 130 kilometers (80 miles) per hour in a matter of seconds, and they do not usually last long. So it was a stroke of luck that on April 17, 1996, the Thematic Mapper (TM) on Landsat 5 happened to capture this false-color image of an avalanche barreling down a steep flank of Kanjut Sar, a peak in the Karakoram Range in northern Pakistan. The image combines infrared, red, and green wavelengths to make it easier to distinguish the avalanche. Snow appears red; bare rock or soil is cyan. Shadows are black.

The source of the avalanche appears to be a slope at roughly 6,500 meters (21,000 feet) elevation. As the avalanche gathered force, snow swept into a valley and tumbled nearly 750 meters (2,500 feet) onto Khurdopin Glacier.

Khurdopin has a prominent band of debris (a medial moraine) that runs down its center. The moraine winds and loops in a distinctive way that suggests the glacier “surges” every few decades. Surging glaciers cycle through quiet periods, in which they store large amounts of ice and snow at high elevation, and then periods of rapid forward movement.

Jakob Steiner of Utrecht University and the Mountain Hydrology group first noticed the avalanche while investigating Khurdopin’s history of surging. By digging through satellite imagery, researchers have described surges in the 1970s and 1990s. Steiner and colleagues are tracking a newer, even faster surge that began in October 2016. They keep a particularly close watch on Khurdopin because its surges can dam the Vijerab River and lead to dangerous floods downstream.

With a height of 7,760 meters (25,460 feet), Kanjut Sar is the 11th highest mountain in Pakistan and the 26th highest in the world. Though not frequently climbed, it is well-known for its avalanches. In a report published by the American Alpine Club, climber Toni Spring recounted a close call with an avalanche on the mountain in 1986.

“We had just set up Camp I at 5,700 meters when we heard the sound of tons of wet snow sliding. We jumped aside to a safer spot. The avalanche swept away our camp, leaving us barefoot in the snow. Fortunately, we could dig out enough gear to descend, but it was difficult without outer boots.”