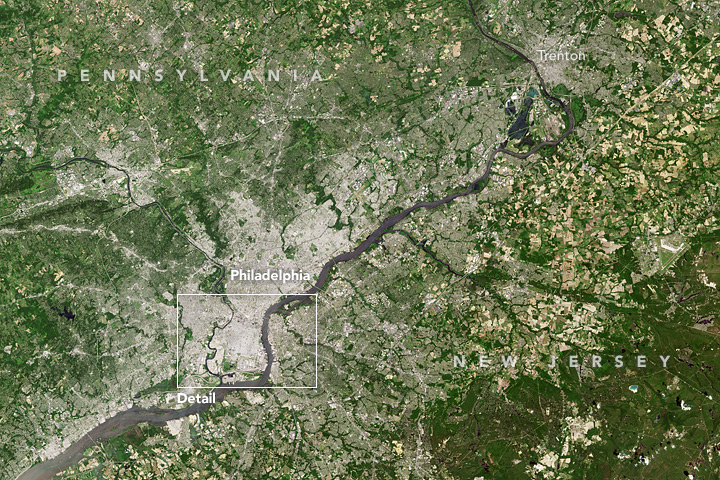 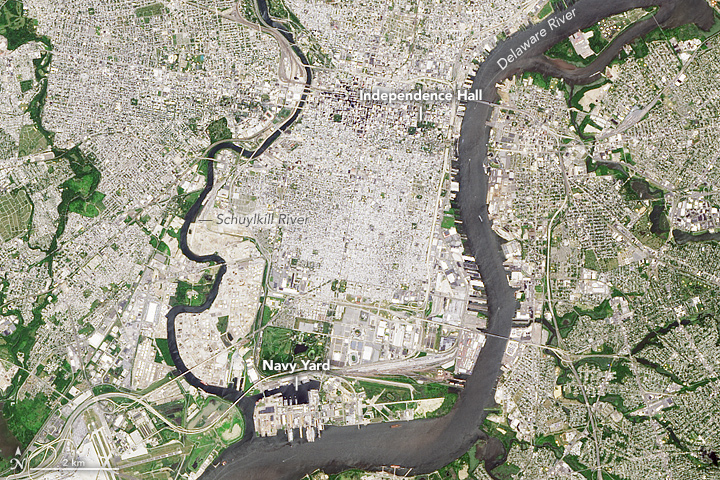 The Birthplace of the United States

Situated between the Schuylkill and Delaware rivers, Philadelphia was founded in 1682 by William Penn as the seat of a Quaker colony. Later, its location just upstream of the Delaware Bay and Atlantic Ocean made it an industrial, commercial, and cultural hub of the American colonies.

When the area’s original inhabitants, the Lenni Lenape (Delaware) Indians lived here, much of the land was forested. Swedish and Dutch settlers had already traveled in the area when Penn finally came to it and signed a treaty with the Lenape to establish a city. He called his colony—now the state of Pennsylvania—Sylvania, after its sylvan, wooded appearance. Current-day Philadelphia had “a high and dry land next to the water, with a shore ornamented with a fine view of pine trees growing upon it,” according to a historical account.

More than 300 years after Penn’s arrival, this landscape remains verdant, despite its urban development. The natural-color image above shows Philadelphia and the surrounding area as it appeared on June 1, 2013, when the Operational Land Imager (OLI) on the Landsat 8 satellite passed overhead.

Nearly a hundred years after Philadelphia was established, the founding fathers of the United States met in this thriving city roughly at the geographic center of the 13 colonies. It was here that they debated, composed, and signed the documents that would become the blueprints of the American government. In 1776, they signed the Declaration of Independence in Carpenter’s Hall, not far from the red-brick building that then housed Pennsylvania’s colonial government; in 1787, they signed the Constitution in the same place. (Carpenter's is now known as Independence Hall.) Between 1781 and 1788, it was also the seat of the U.S. government.

Today, Philadelphia is the fifth largest city in the U.S., with more than 6 million people living in its metropolitan area. The city saw its heyday as a manufacturing hub in the 1800s. Currently, its largest sectors include education and health services.

Traces of the city’s history remain embedded in its landscape. A belt of large, tall buildings make up Center City, the area around Independence Hall. To the south lies a dense grid of smaller houses— South Philadelphia, home to the city’s Italian Market. At one point, this was a satellite town to the city; the two merged in 1854, when the area’s population surged. It remains a diverse area today, home to a large African American community, as well as the remnants of once sizable Italian, Irish, and Jewish immigrant populations.