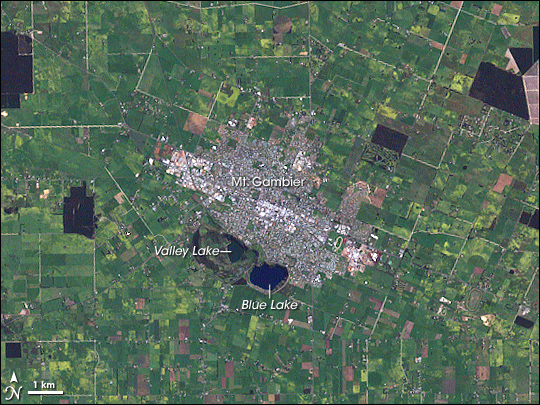 Sitting near Australia’s rugged southern coast, the South Australian town of Mount Gambier is built on the side of an extinct volcano that last erupted between 4,300 and 28,000 years ago. Since that time, the caldera of the volcano has filled with rainwater, forming a very deep lake that provides the town with water. The large caldera lake is called Blue Lake due to a rather peculiar characteristic: the water turns a brilliant cobalt blue during the summer and early fall (approximately November-March). The town celebrates Blue Lake Days, a festival in November, timed with the turning of the lake color.

The photo-like image of Mount Gambier was acquired from low-earth orbit by the Landsat 7 satellite’s Enhanced Thematic Mapper Plus (ETM+) instrument on October 1, 1999. In this late spring image, vivid green fields surround the white limestone and concrete of the town. Much of the greenery is dairy pastureland, supporting one of the major local industries, cheese. Patches of deep, dark green are pine plantations, which support another mainstay of the local economy, timber. But perhaps the most striking feature is the pair of caldera lakes immediately south of the town.

True to its name, Blue Lake is blue in the image, even though ETM+ acquired the image on October 1, 1999, a month before the Blue Lake Days festival and the normal color-turning of the lake. The lake turns blue at different times each year, and the satellite may have captured this image as the lake transitioned from its dark blue winter color to the bright blue summer color, a shift that occurs over weeks. Also, the satellite may have observed more blue light than a person standing by the lake would, since blue light tends to scatter up more than out at an angle. Thus someone immediately above the lake looking down would see a more blue-toned surface than a person standing on the rim of the caldera.