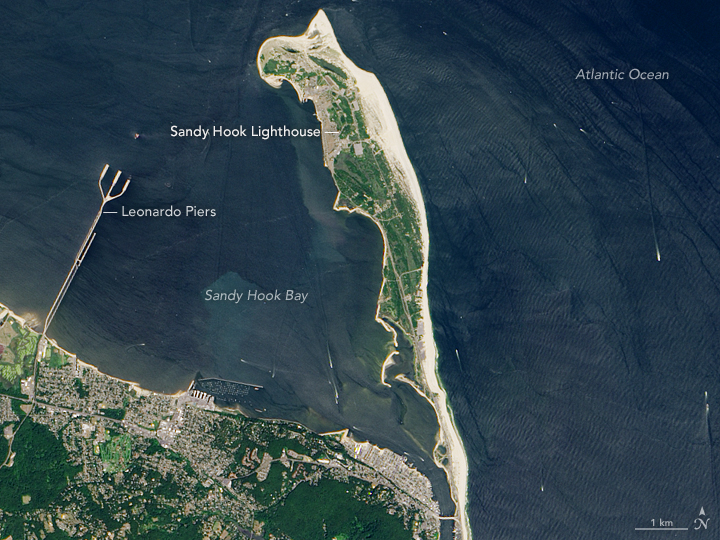 The land that Dutch colonists named “Sant Hoek” is an oasis for people looking for an quick escape from the New York metropolis. The natural beauty of Sandy Hook stands within a few miles of the densest urban area in the United States. It also has been a critical part of the maritime history and military defense of New York and New Jersey.

The barrier spit stretches about 6 miles (10 kilometers) from the northern end of the New Jersey shore toward New York Harbor. Its length is covered with coastal woodlands, sand dunes and beaches, salt marshes, and holly forests that provide a haven for at least 300 bird species that pass through like so many tourists.

The Operational Land Imager (OLI) on the Landsat 8 satellite acquired these images of Sandy Hook and Gateway National Park on August 25, 2016. The white streaks in the ocean are the wakes of pleasure boats, ferries, and commercial ships. The ground-based photos were taken in February 2017. 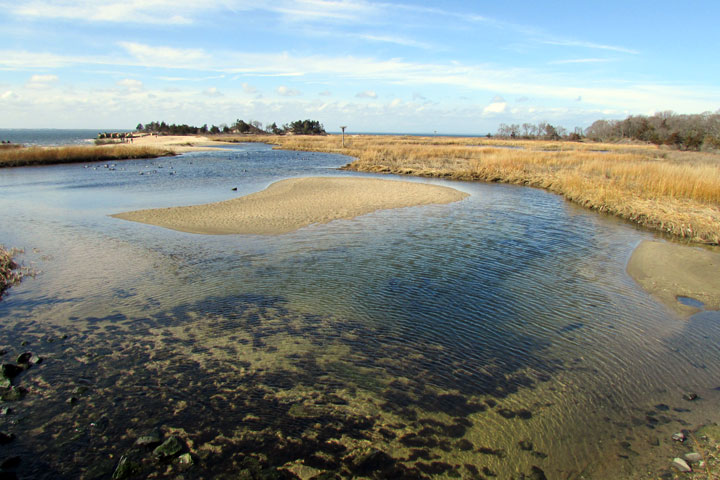 Discovered by Henry Hudson in 1609, Sandy Hook quickly became an important landmark and anchorage for ships heading to New York. By the middle of the 18th century, city merchants—who were losing ships, sailors, and money on the approach to New York Harbor—raised the money to build a lighthouse on the north end of the hook.

First lit on June 11, 1764, Sandy Hook lighthouse still stands as the oldest continuously operating lighthouse in the United States. When it was built, the light stood just 500 feet (150 meters) from the tip of the spit; by 1864, it was 0.75 miles inland. Today, due to the relentless march of sands and sediments to the north (littoral drift), the lighthouse now stands 1.5 miles (2.4 kilometers) south of the tip. 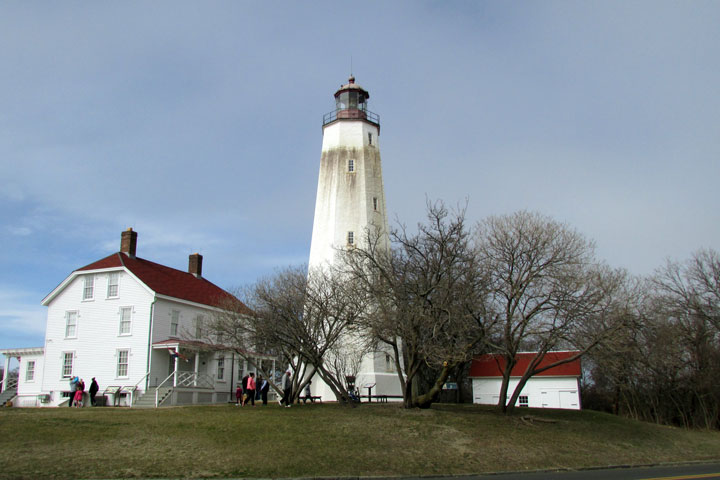 The strategic position outside of the Narrows and New York Harbor quickly made Sandy Hook an important military base. Having lost the Hook to the British during the Revolutionary War, the fledgling U.S. government built Fort Gates in time for the War of 1812. The entire peninsula was purchased by 1814 and has been kept free of civilian development ever since. A second fort was started in the middle of the 19th century, but it was never completed because the artillery developed during the Civil War rendered the design obsolete. The U.S. Life Saving Service (forerunner to the Coast Guard) had more success in that era, with its two Sandy Hook stations working to rescue shipwrecked sailors.

Military operations at Sandy Hook reached their peak between the Civil War and the Cold War. The area first served as Sandy Hook Proving Ground, where soldiers tested new ammunition and ordnance at a safe distance from human settlements. Later, Fort Hancock was raised in 1895 to shore up coastal defenses of New York City. Concrete bunkers and rail-mounted guns were buried in the beach dunes so that they could disappear from sight after firing on enemy ships. In later years, Nike missiles stood ready to shoot down nuclear weapons. Many of those defenses are still standing and can be observed during a visit to the beach.

Though Sandy Hook is now administered by the National Park Service and the Coast Guard, the nearby Leonardo Piers still keep the military connection. Part of Naval Weapons Station Earle, the 2.9 mile (4.7 kilometer) train trestle and pier system allows ships to be loaded with ammunition carried by rail from inland forts. 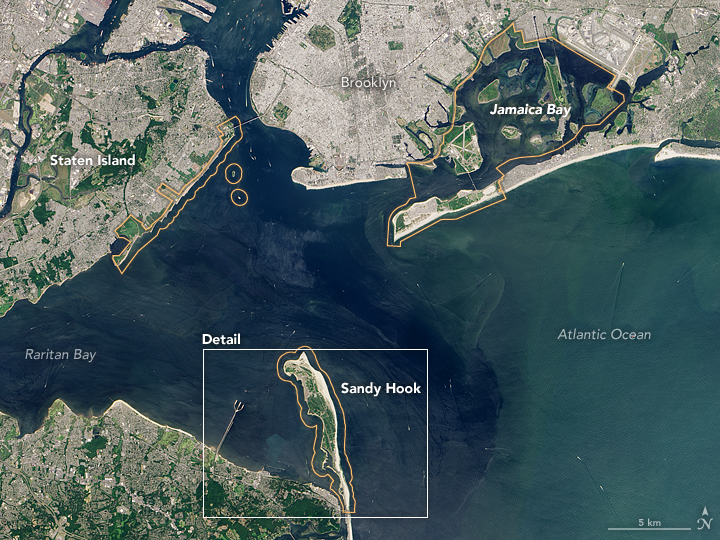 Sandy Hook is one of three parts of Gateway National Recreation Area, named because it is the Gateway to the New York region. The Park Service maintains 27 facilities spanning New Jersey and three boroughs of New York (Staten Island, Brooklyn, and Queens). Created in 1972, the recreation area is the fifth-most visited National Park Service site, averaging 7.6 million visitors per year.