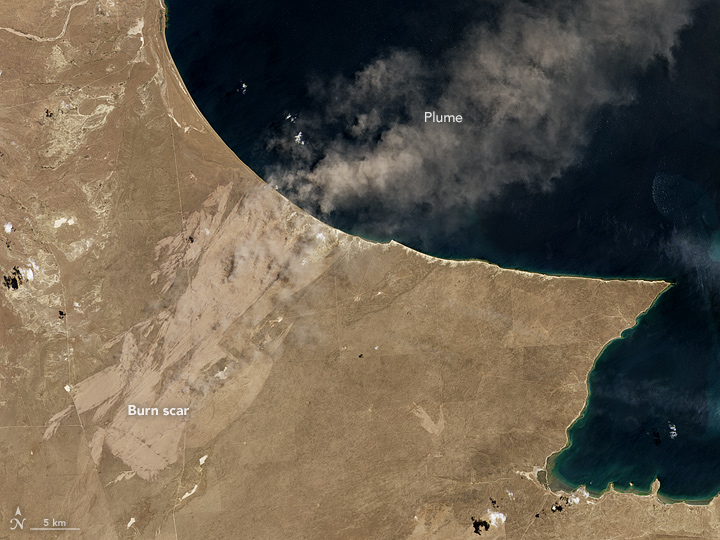 After Patagonian Fires, A Scar Remains

Hot weather in December 2016 caused dozens of wildfires on Argentina’s east coast, including one that created a massive burn scar west of Argentina’s Valdez Peninsula.

The image above, acquired by the Operational Land Imager (OLI) on Landsat 8, shows the scar in January 2017, several weeks after the fire. Another image (below) captured in February 2017 by the Moderate Resolution Imaging Spectroradiometer (MODIS) on NASA’s Terra satellite shows a wider view of the scar. In both images, a plume of material blows out from the scar and over the Atlantic Ocean.

The plume could be airborne ash, said Santiago Gassó, a NASA scientist who studies the global transport of ash and dust. “Patagonia is so windy,” he said, that after a few days, the smallest particles would have been blown away. While those fine ashes—the remnants of burnt leaves and wood—are scattered by the wind, the ones that stay on the ground are baked into a hard crust that stays in place until it is dispersed—usually, by cattle or humans.

While Gassó believes ash caused this plume, it is possible that finely ground rock and soil dust also could have become dislodged by the fire. Vegetation and roots (which usually hold the soil in place) would have been removed by the fire, making it easier for the strong regional winds to sweep dust off of the land. 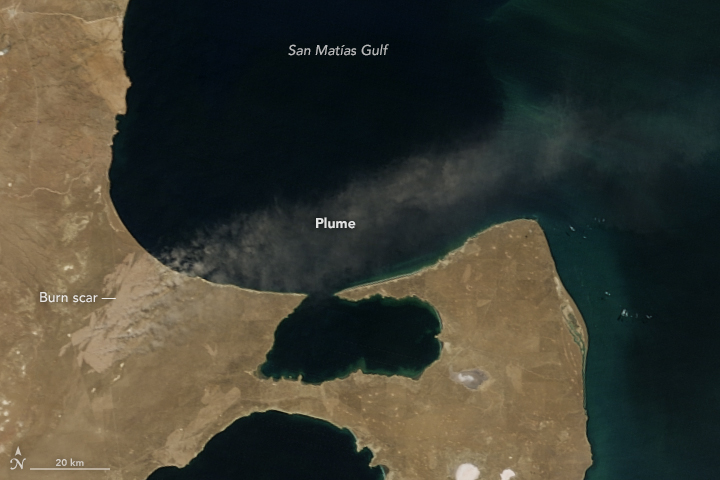 This part of Argentina’s coast is sparsely populated, arid, and covered in scrubby undergrowth. The closest city is Puerto Madryn, more than 30 kilometers (20 miles) from the burn scar. Due to this remoteness, it is difficult to verify the composition of plumes like those in the images above.

Still, in places like this where water is scarce, a fire can have big impact on the landscape, said Gassó. “It’s very delicate,” he said. “You have a fire like this and it’s so arid that when something disturbs the ecosystem, it takes a long time to come back.”