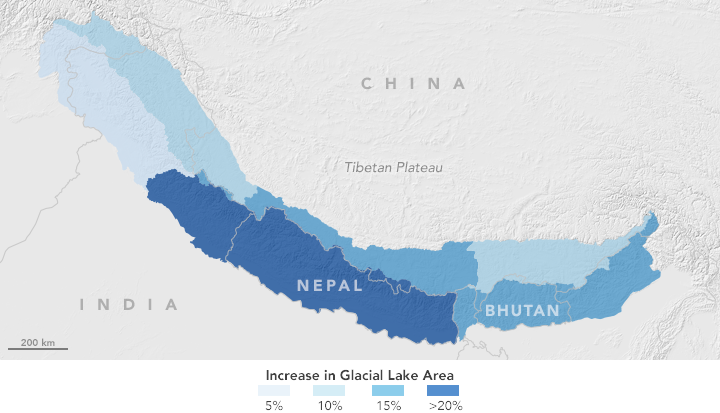 As Glacial Lakes Grow, So Do the Risks

For people living around the Himalayas, the effects of global warming are anything but distant or abstract. As air temperatures have risen in the past half-century, glaciers have melted and retreated in these mountains. Between 1990 and 2015, Landsat satellites have documented a significant increase in both the number and average size of glacial lakes throughout the range.

After analyzing hundreds of satellite images, a research team from the Chinese Academy of Sciences and University of California, Los Angeles (UCLA) concluded that the number of Himalayan glacial lakes increased from 4,459 in 1990 to 4,950 in 2015, with a total area gain of 56 square kilometers, or 14 percent.

The degree of change varied by region. The size and number of lakes in the southern central Himalayas increased the most, particularly in Nepal, at elevations between 4,200 and 5,800 meters. In the map above, regions where lakes expanded the most (20 percent or more) are shown with dark blue; regions where lakes grew only slightly (10 percent or less) are light blue. Lakes in the western Himalayas are generally more stable. Some glaciers in the Karakoram, for instance, are advancing. In contrast, rapid warming in the central Himalayas—as well as more soot being deposited on ice—may explain the rapid retreat of glaciers there. 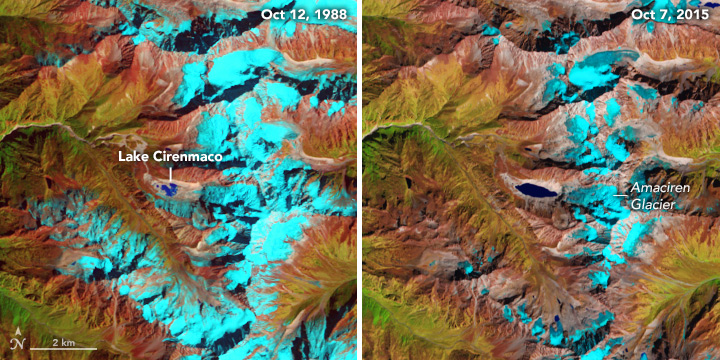 The researchers also identified 118 proglacial lakes that pose a particularly high risk to people living downstream. These lakes—many of them in the central Himalayas near Kathmandu, Nepal, and in the eastern Himalayas near Thimphu, Bhutan—grew by more than 1 percent each year.

One rapidly expanding proglacial lake, Cirenmaco, highlights the risks. It stands at the base of Amaciren Glacier in the Zhangzangbo Valley of Nepal, and it was the scene of outburst floods in 1964 and 1981. The flood in 1981 was particularly destructive, killing hundreds of people, knocking out a power plant, and destroying bridges and roads. As seen in the false-color Landsat images above, Cirenmaco’s size more than doubled between 1988 and 2015.

While proglacial lakes generally grew steadily each year, the lakes emerging on top of the glaciers were small, short-lived, and fast-changing. Many supraglacial lakes are perched on debris-covered ice, meaning lake water can quickly drain deeper into the glacier when cracks emerge.

Nepal’s Ngozumpa Glacier, which lies about 25 kilometers (15 miles) west of Mount Everest, has seen a significant increase in the number and size of supraglacial lakes on its surface. The pair of Landsat images below show the surface of the glacier in 1985 and 2015. Many of the lakes that existed in 1990 had drained by 2015, while many new lakes emerged in other areas. 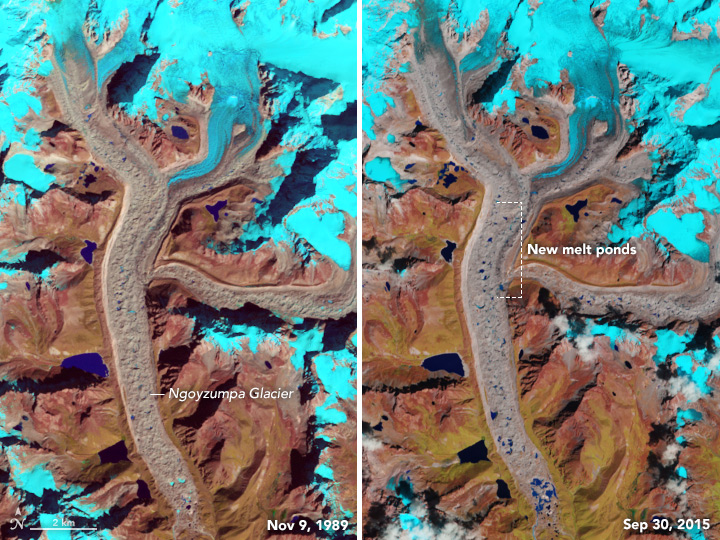 Researchers point to rising temperatures and melting glaciers as the primary cause for the increase in the size and number of lakes in the Himalayas. Rates of warming vary by region, but match the increases in total lake area. For instance, the team noted that between 1979 and 2014, temperatures rose by 5.9 degrees Celsius (10.6°Fahrenheit) at Nyalam in the central Himalaya; 1.0 degrees C (1.8°F) at Shiquanhe in the western Himalaya; and 0.4°C (0.7°F) at Yadong in the eastern Himalaya.

“As the region continues to warm, it is urgent that scientists continue to monitor the most rapidly expanding glacial lakes with satellites because many are remote and very difficult to access,” said Yong Nie, lead author of the study. “If we know which lakes pose the greatest risk, then authorities can take steps to develop early warning systems, drain specific high-risk lakes, and educate people on how to minimize their exposure to flash floods.”

Yongwei Sheng, a geography professor at UCLA and one of the study authors, added: “While we have reported on widespread lake expansion across the Himalayas, region-specific driving mechanisms, lake-specific risk assessments, as well as future change prediction all deserve further investigation.”