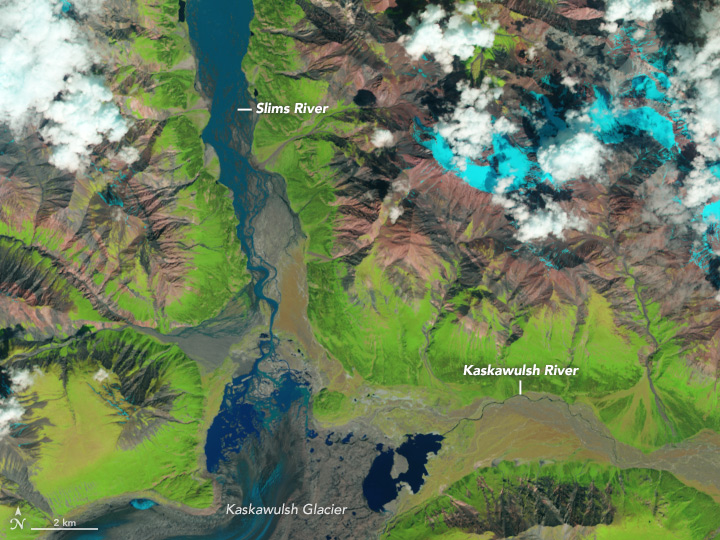 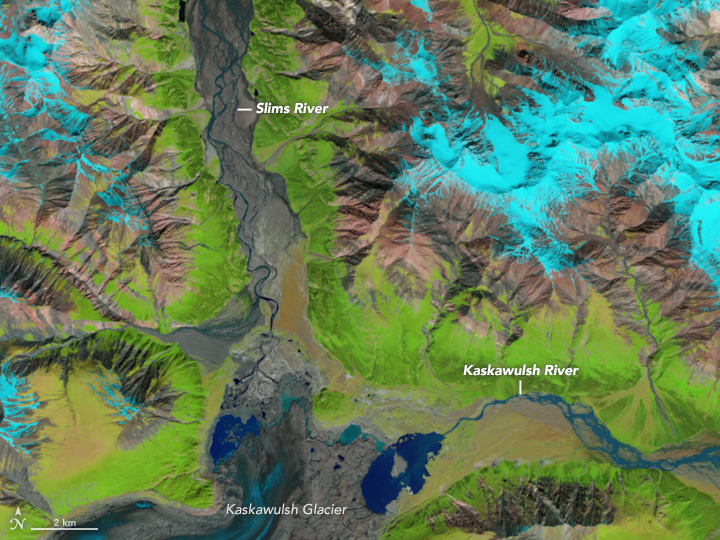 River Piracy in the Yukon

In the spring and summer of 2016, Daniel Shugar and colleagues witnessed an act of piracy in Canada’s Yukon Territory. The Kaskawulsh River hijacked the Slims River, stealing much of its supply of water and dramatically reshaping the region’s drainage.

Roles reversed in spring 2016—that’s when pilots first informed Shugar, a geomorphologist at University of Washington-Tacoma, that the Slims River was running low and the Kaskawulsh River was flooded. Shugar and colleagues visited the site in August, and that’s when the magnitude of the change “really sunk in.”

The river piracy is visible in this image pair, acquired with the Operational Land Imager (OLI) on Landsat 8. The false-color images combine observations of shortwave infrared, near-infrared, and red light (OLI bands 6, 5, 4) to better distinguish areas of water (dark blue) from the surrounding landscape. Vegetation is green, and snow and ice are light blue.

The first image was acquired on June 23, 2015, when the Slims River filled its valley. The second image was acquired on June 18, 2016, by which time the Slims River was just a narrow ribbon of water. Meltwater from the thinning, retreating glacier carved a new channel at the front of the glacier (just a few pixels wide in this image) that now connects a series of azure lakes and routes most of the meltwater into the large lake feeding the Kaskawulsh River. As a result, the Kaskawulsh appears much wider. Turn on the image comparison tool to see the change.

More changes followed. According to Shugar, water draining northward via the Slims River continued to dwindle throughout the season and by late summer, the Slims was disconnected from its source. The diversion, the researchers say, is likely permanent, and could affect the local ecosystem.

“Our climate is changing, but it’s not only temperatures and sea levels that are impacted; other things are occurring,” Shugar said. “This river piracy is one such impact, and we expect to be thrown a few curve balls when it comes to these changes going forward. We need to continue studying and monitoring our Earth systems, both on the ground and from space, so as to better understand the coming changes, and prepare for them.”