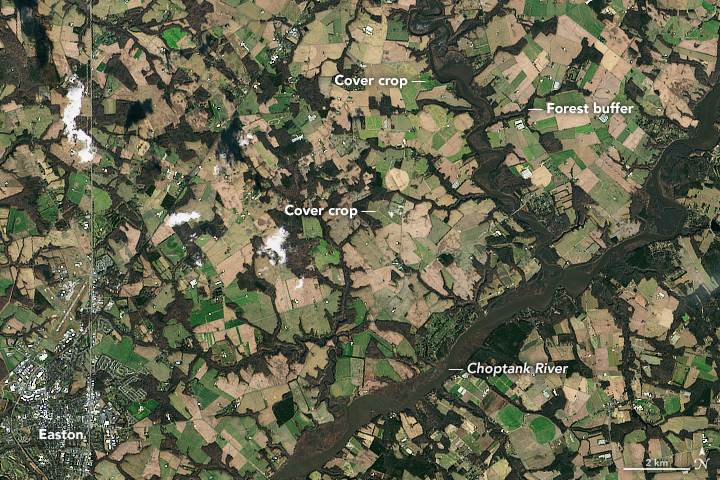 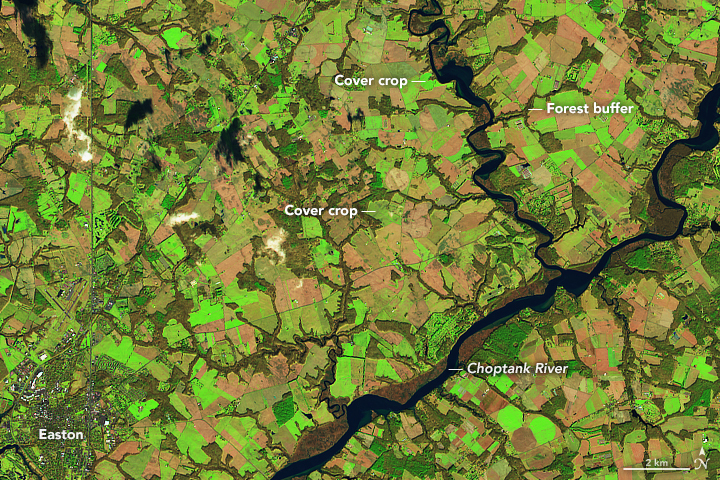 For the second year in a row, farmers in Maryland planted a record amount of winter cover crops in 2016-17. These cold-tolerant crops—including wheat, rye, barley, and radish—are planted in the fall. In addition to increasing soil health and boosting yields, cover crops reduce soil erosion and absorb nutrients such as nitrogen that could otherwise affect water quality in waterways and, ultimately, Chesapeake Bay.

While most of their cover crop work happens on the ground, farmers get some help from space. Scientists at the USDA-Agricultural Research Service, the U.S. Geological Survey, and the Maryland Department of Agriculture are using data and imagery collected by satellites to monitor cover crop performance, to determine how effective the crops are in protecting the Bay, and to develop strategies that maximize benefits to growers and the environment while minimizing costs.

Most of the initial research showing the utility of cover crops was conducted in the 1980s on small-scale plots managed by the University of Maryland. With the recent expansion of a Maryland Department of Agriculture (MDA) program that pays farmers for planting cover crops, the agency has sought more tools to ensure that the program is working efficiently.

Traditionally, the agricultural agency has sent field staff to perform in-person “spot checks” of enrolled fields to ensure that winter cover crops are managed in accordance with guidelines, explained the program manager Jason Keppler. Since satellites regularly capture imagery of the entire state, they can now do the job more quickly. “By incorporating satellite data into our business process, we hope to gain efficiency in management as well as ensuring effective use of state resources.”

As the program transitions to a fully digitized record-keeping system, Keppler expects to reduce the amount of time staff spend performing spot checks. Instead, he expects staff will spend more time working with farmers to troubleshoot problems and to address concerns about conservation practices.

Scientists led by Wells Hively of the U.S. Geological Survey and Greg McCarty of the U.S. Department of Agriculture are working with MDA to integrate data from Worldview, Landsat, SPOT, and Sentinel satellites for the monitoring effort. By comparing satellite observations with ground-based data collected from collaborating farms, Hively and McCarty have mapped the performance of winter cover crops, as well as certain tilling practices that reduce erosion and runoff. They have already identified a few management choices that lead to more successful cover crop performance. For instance, planting early—before the first frost—maximizes the amount of nitrogen that crops can absorb. The team has also found that wheat takes up less nitrogen during the early-winter growing season than barley or rye.

Their results have been used to inform models of water flow, quantifying the effect of winter cover crops in the region. According to one model, cover crops reduced nitrogen loading by anywhere from 27 to 67 percent in each of the past 10 years in part of the Choptank River basin.

Much of the research so far has focused on a few counties on the Eastern Shore of Maryland. However, advances in the speed of image processing made possible by Google Earth Engine have prompted Hively and McCarty to work with NASA’s DEVELOP program. The research group—led by Sunita Yadav-Pauletti—is writing new algorithms that will make finding and interpreting relevant satellite data faster than ever. "Once we make these algorithms operational for the whole state, we will be able to pinpoint areas where cover crops are working well and areas where we still have more work to do," said Hively.

While research has centered on Maryland (because the state has such an active cover crop program), the researchers also have studied areas in Pennsylvania and New York. They hope that the satellite-based techniques they develop will eventually be used to analyze the entire Chesapeake watershed.