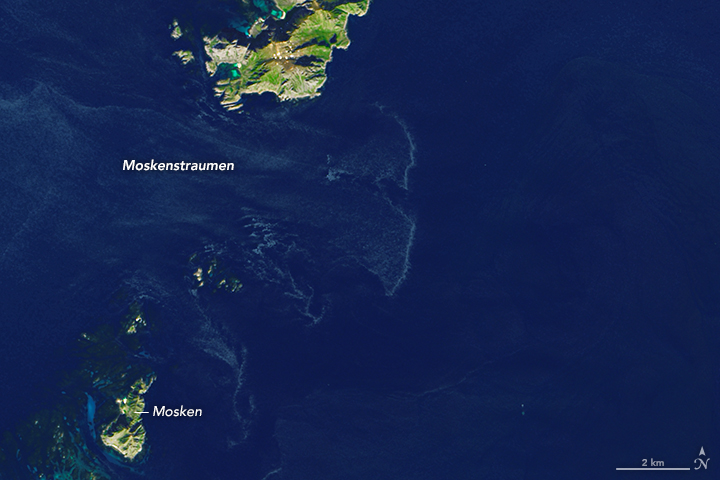 The churning waters off Norway’s coast have been rumored to swallow boats whole. Their force captured the imagination of writers like Edgar Allan Poe. “Even while I gazed, this current acquired a monstrous velocity. Each moment added to its speed—to its headlong impetuosity,” wrote Poe in the short story “A Descent Into the Maelstrom,” which introduced the word into the English language. “In five minutes the whole sea, as far as Vurrgh, was lashed into ungovernable fury.”

Poe went on to describe giant vortices, the likes of which he had never seen in person, but read about in legends. In reality, the maelstrom is not one massive whirlpool, but a series of smaller eddies created by changing tides. The term for these currents, “maelstrom,” derives from the Dutch, “maalen” (to grind, whirl) and “stroom” (stream). In Norwegian, they are called “moskstraumen” or “moskenstraumen” because they are particularly strong off the island of Mosken, reaching speeds of 5 meters per second (11 miles per hour).

Around the Lofoten archipelago in northern Norway, a large-scale wave of northbound water collides with the continental shelf, creating a regular tide. “The narrowing of the shelf from a relatively broad shelf south of Lofoten to a narrow shelf on the northern side of the islands [leads] to strong cross-shelf tidal currents near The Lofoten Point,” according to the authors of a hydrological study of northern Norway. The islands themselves also shape the waterflow in the area. 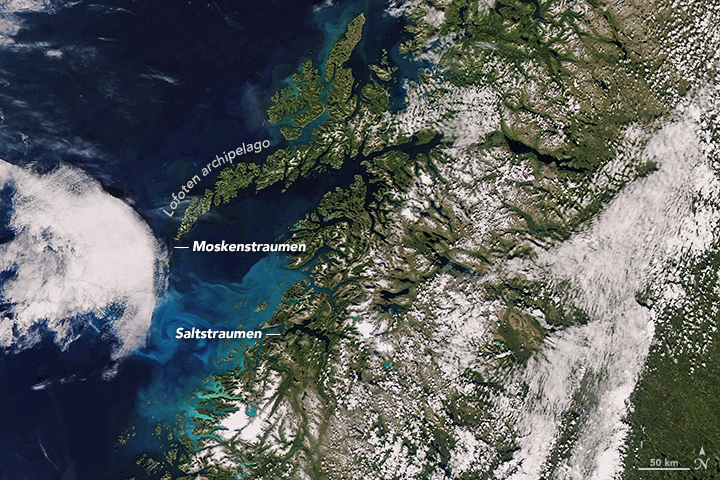 The images above show the moskenstraumen as it swirls around the tip of the Lofoten archipelago. The data were acquired on May 30, 2013 (top) and July 20, 2016 by the Operational Land Imager (OLI) on the Landsat 8 satellite. The colors in the top image have been enhanced to bring out the contrast between the swirling eddies and the sea.

The narrow channel by Saltstraumen, located roughly 100 kilometers to the southeast of Lofoten, produces similar strong eddies. Shallower waters there create dramatic vortices. An OLI image from July 11, 2016, shows phytoplankton-laden waters churning in the Saltfjorden—a result of the tides there. 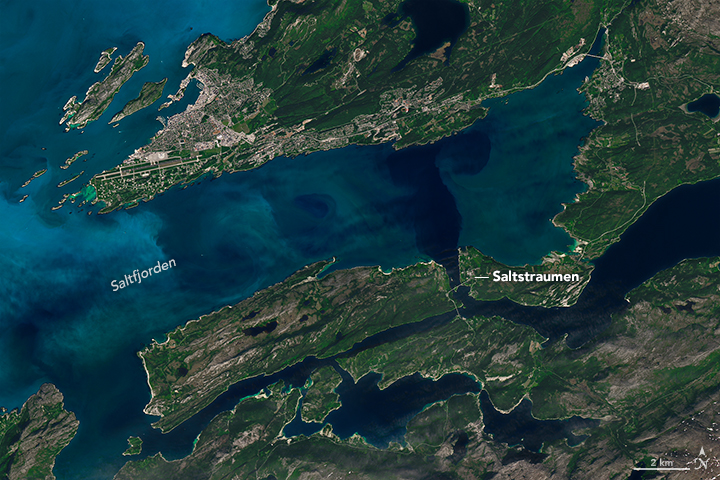