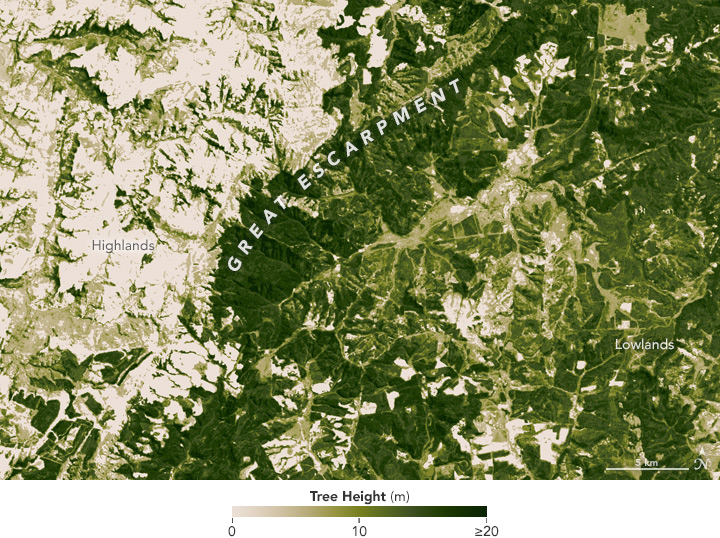 Africa’s Great Escarpment is a place of big ups and downs. Parallel ridges and deep, long valleys create a range of habitats and elevations for its flora and fauna. But the Escarpment sees ups and downs in another sense: tree height varies significantly here.

In a November 2016 paper published in Remote Sensing of Environment, scientists created a continent-scale representation of tree canopies in Africa. In analyzing land use on the continent, researchers identified multiple areas with deforestation. But elsewhere, plantations have brought tree growth to former grasslands, stimulating economic growth but pushing out native wildlife.

The Great Escarpment is one such place. The ridge, which separates a highland plateau from low-lying coastal areas, extends thousands of kilometers—across several countries in southern Africa. Much of its eastern flank, now greatly fragmented, was once carpeted in peat moss and grass, which filtered water flowing to ecosystems downstream. Now, timber has replaced much of this low-lying vegetation.

As patches of trees are cut down for harvest, new ones are planted in their place. “Trees come and go all the time,” said Matthew Hansen, the lead study author and a researcher at the University of Maryland.

The map below was created by combining topography and elevation data with computer models and satellite data on tree heights as observed by IceSat, Landsat 8, and Landsat 7. 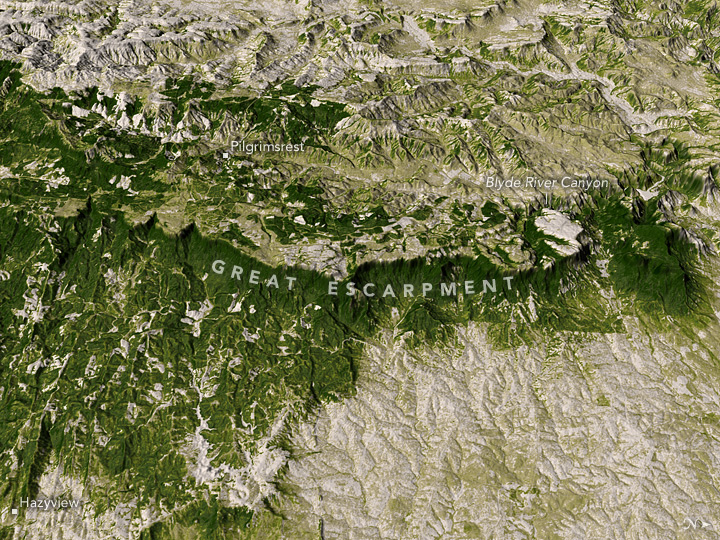 The section of the Great Escarpment shown on this page is located in South Africa’s Mpumalanga province, near the town of Sabie. The expansive, terraced hills bear the signs of human intervention: patches of trees in neat, symmetrical rows and varying stages of growth. The trees are likely eucalyptus or pine, both of which supply timber for export.

Legend has it that the first commercial trees were planted here in the late 1800s by Joseph Brook Shires following a gold rush. The trees have been called “Brown Gold,” a name that reflects their economic worth in the area’s economy. Together, the provinces of Mpumalanga, KwaZulu-Natal, and the Eastern Cape contain roughly 80 percent of South Africa’s commercial plantations of trees.

But more trees do not spell good news for grassland ecosystems, said Ralph Clark, a researcher at the Great Escarpment Biodiversity Programme of Rhodes University. “Tree cover increase in this area is actually environmentally devastating to biodiversity and water supplies,” Clark wrote in an email. Plantations consume a lot of water; they can also lead to extinction of local species, he said. “Don’t confuse mitigating deforestation elsewhere with afforestation in this context—it’s the same as putting a bulldozer through a rainforest in terms of species impacts.”