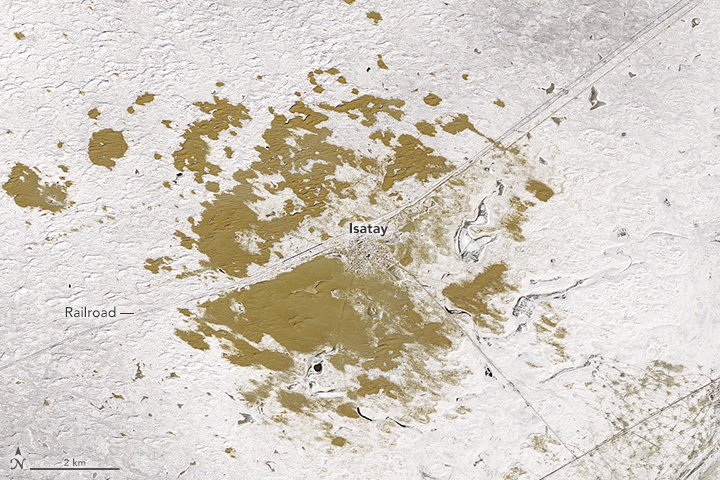 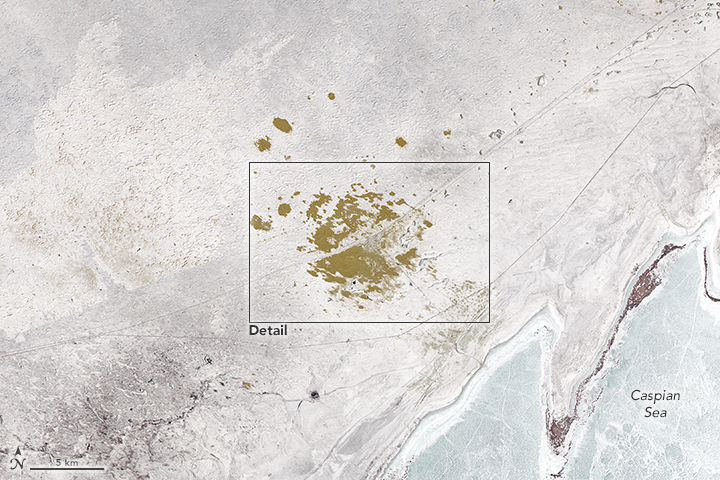 Beating Back the Sands in Isatay

Looking down from space in winter, the patch of earth around Isatay looks greenish brown—a misleading color. This remote part of Kazakhstan—a country with just 8 percent arable land—is far from verdant. In several parts of the country, desertification is a problem, often a result of overgrazing, farming practices, or aggressive land use in this arid climate. The encroaching sands have shaped the landscape around the village of Isatay, just north of the Caspian Sea.

Acquired by the Operational Land Imager (OLI) on Landsat 8, these images show Isatay on February 4, 2017, after a fresh dusting of snow turned the countryside white. The colored patches are sand dunes, which appear darker than they would when the landscape is free of snow. The network pattern on the lower right may be oil rigs, as several large oil and gas pipelines run through the region.

The people of Isatay have been battling the desert for many years. So in 2013, when sand dunes devoured dozens of houses, the villagers did what they had done before: they took up shovels and began to dig away at the mounds of sand covering dwellings, gas pipes, and irrigation trenches. Some of them gave up and moved. But others still hold out hope for an unlikely savior.

That great hope is Haloxylon ammodendron, known as “saksaul” in Russian. The desert-dwelling shrub could help stem the spread of the dunes by anchoring the soil. The haloxylon has a fan of broom-like branches and leaves resembling scales, and it is one of few shrubs that grows in Central Asian deserts.

Between 2008 and 2010, the local government planted haloxylon trees to protect the railroad tracks from being buried by sand. In subsequent years, the leaders of Isatay set aside more than 3 million tenge (roughly $9,000 U.S.) to plant more of the trees.

But even this hardy plant has not taken easily to the terrain, according to local news. It requires water, a scarce resource in the desert. So despite the planting efforts, the desert continues its advance in Isatay and elsewhere in Kazakhstan.