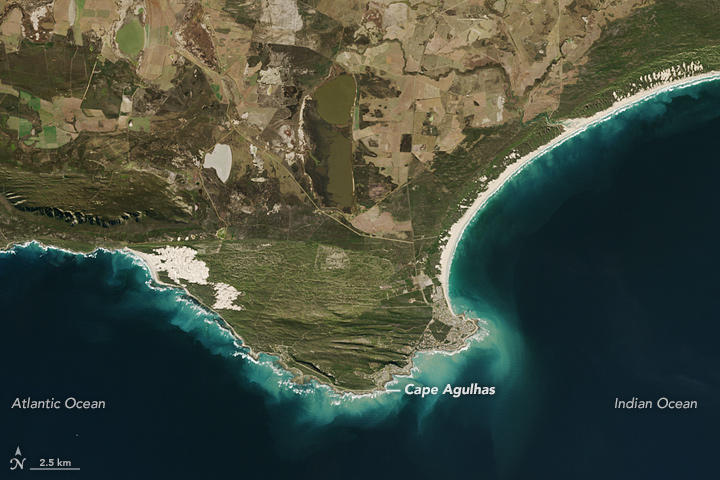 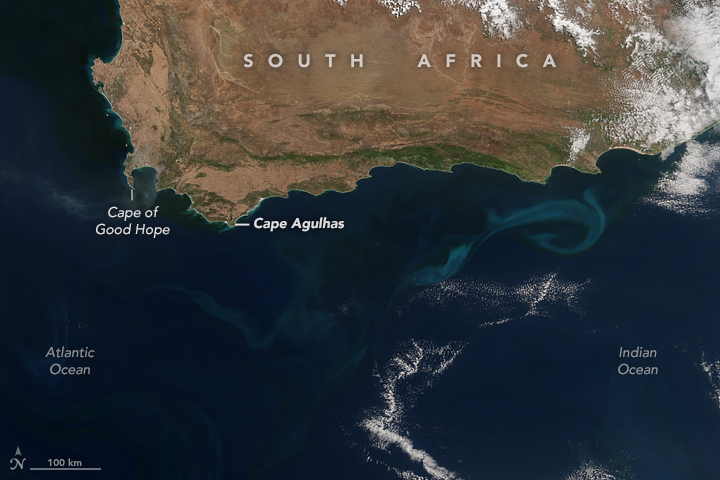 The Treacherous and Productive Seas of Southern Africa

Mariners have long considered the waters off Africa’s southern tip to be treacherous. After decades of failed attempts to navigate around the continent, Portuguese explorers took to calling one of its southerly promontories the Cape of Storms. (It was later renamed the Cape of Good Hope.) Cape Agulhas, Africa’s southernmost point, is Portuguese for Cape of Needles. Historians think the name may be a reference to the needle-like rock formations and reefs along its coast.

The convergence of two ocean currents—one warm and one cold—in the shallow waters of Agulhas Bank produces turbulent and unpredictable waters. Warm water arrives from the east on the fast-moving Agulhas Current, which flows along the east coast of Africa. Meanwhile, the cooler, slower Benguela Current flows north along Africa’s southwestern coast. That means navigating around the tip of South Africa requires mariners to sail against ocean currents on both sides of the continent.

Eventually, they learned to stay well out to sea as they rounded the Cape of Good Hope and Cape Agulhas, but not before failed attempts had littered the area’s reefs with wrecked ships. Even in modern times, shipwrecks are relatively common in the turbulent water of Agulhas Bank, where colliding currents regularly spin off rogue waves, eddies, and meanders.

The instability and churning does have one benefit. As water masses stir the ocean, they draw nutrients up from the deep, fertilizing surface waters to create blooms of microscopic, plant-like organisms (phytoplankton) in the open ocean. The phytoplankton feed a robust chain of marine life that makes Agulhas Bank one of the richest fishing grounds in southern Africa.

The top image of Cape Agulhas was acquired by the Operational Land Imager (OLI) on Landsat 8 on May 25, 2016. The Visible Infrared Imaging Radiometer Suite (VIIRS) on Suomi NPP acquired the second image of southern Africa on January 4, 2017. The light blue swirl to the east of Cape Agulhas is a phytoplankton bloom in an area of cool, upwelling water.

NASA Earth Observatory images by Jesse Allen, using Landsat data from the U.S. Geological Survey and VIIRS data from the Suomi National Polar-orbiting Partnership. Suomi NPP is the result of a partnership between NASA, the National Oceanic and Atmospheric Administration, and the Department of Defense. Caption by Adam Voiland.