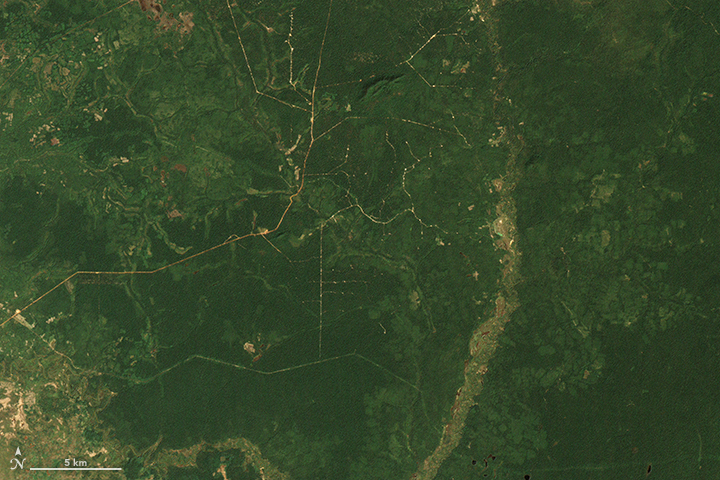 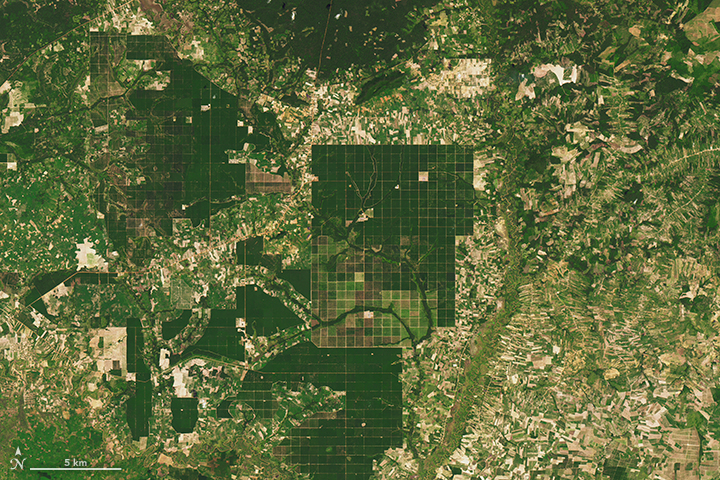 Cambodia has one of the fastest rates of forest loss in the world. In broad swaths of the country, densely forested landscapes—even those in protected areas—have been clear-cut over the past decade. Much of the forest has been cleared for rubber plantations and timber.

Scientists from the University of Maryland and the World Resources Institute’s Global Forest Watch have been using Landsat satellite data to track the rate of forest loss on a global scale. Though other countries have lost more acres in recent years, Cambodia stands out for how rapidly its forests are being cleared.

Between 2001 and 2014, the annual forest loss rate in Cambodia increased by 14.4 percent. Put another way, the country lost a total of 1.44 million hectares—or 5,560 square miles—of forest. Other countries with accelerating rates of forest loss include Sierra Leone (12.6 percent), Madagascar (8.3 percent), Uruguay (8.1 percent), and Paraguay (7.7 percent).

The transformation of Cambodia’s landscape has been profound, as revealed by this pair of Landsat images. The first image, captured by Landsat 7’s Enhanced Thematic Mapper Plus on December 31, 2000, shows intact forest near the border of the Kampong Thom and Kampong Cham provinces. On October 30, 2015, the Operational Land Imager (OLI) on Landsat 8 captured the second image, in which much of the forest has been replaced by a grid-like pattern of roads and fields and by large-scale rubber plantations. Clear-cutting has also chewed away at the edges of densely forested areas (dark green) and replaced them with exposed soil, croplands, and mixed forests (brown and light green). 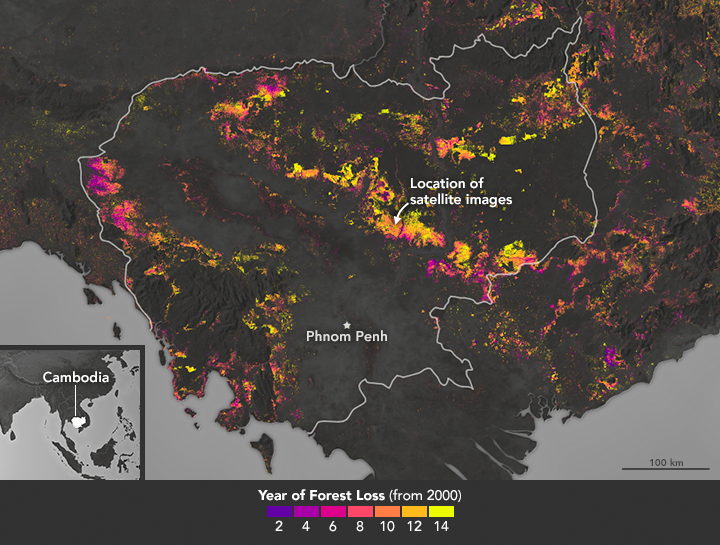 Researchers working with Landsat data and other economic datasets have demonstrated that changes in global rubber prices and a surge of land-concession deals have played key roles in accelerating Cambodia’s rate of deforestation. Concession lands are leased by the Cambodian government to domestic and foreign investors for agriculture, timber production, and other uses. Researchers found that the rate of forest loss within concession lands was anywhere from 29 to 105 percent higher than in comparable lands outside the concessions.

Work by Matthew Hansen and his University of Maryland Global Land Analysis and Discovery (GLAD) lab has played a key role in revealing the scope of deforestation. In 2013, the group published their first global map of forest change. The map above, based on Hansen’s work, depicts the extent of forest loss throughout Cambodia between 2000 and 2014. Much of it has occurred in the past five years.

In conjunction with the World Resources Institute, GLAD has developed a new weekly alert system: deforestation is detected by satellites with each new Landsat image, and users can subscribe for email updates. The freely available alert system is already operating for Congo, Uganda, Indonesia, Peru, and Brazil. The researchers hope to have the system operating for Cambodia and the rest of the tropics in 2017.